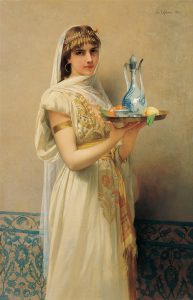 August feels like a much calmer month after the intensity of June and July, however there are still some interesting configurations and connections happening that should keep us occupied for the month ahead.

The New Moon in Leo kicks off the month on August 1 and is accompanied by Mercury stationing direct under an hour later. I think Mercury deserves a round of applause – or maybe you’re thinking he needs one of those crooks to haul him offstage! Mercury began the retrograde period in theatrical Leo, giving us all a taste of stage fright and asking us to reassess our creative self-expression and attitude towards risk taking. Mercury then backtracked into history buff Cancer, perhaps suggesting the root of our issues lay further back in our past – maybe even in childhood.

It seems a blessing that we are finding our voices again just as the New Moon in Leo occurs. This is a time to step into the spotlight, take the limelight, start a new project or romance that makes us fall in love with life all over again. Leo is about confidence, pride, showing off our talents. We’ve got some rousing support too as this lunation trines Jupiter in Sagittarius and Chiron in Aries. The Moon and Sun are also conjunct lovely-dovey Venus. So, we have growing confidence despite any fear of rejection or feeling different. We want to be the star of the show. We do need to be prepared though as Uranus will square this Moon. Sudden surprises, plot twists, expect the unexpected when Uranus in around. Whilst Uranus might add in some nerves, perhaps it’s more excited jitters than all out performance panic.

The First Quarter Moon on August 7 turns our attention to deeper issues. The Sun’s presence in Leo is still playful but with the Moon in Scorpio, we know that to bring our true light into the world, we must confront our shadows and complexities.

Jupiter then stations direct in Sagittarius on August 11. After a period of inner growth, we can now begin to expand again, this time bolstered by a better understanding of what we need to do to achieve success. Jupiter’s passage shows us where opportunities lie, where we can achieve greater happiness and what we need to develop. Often when we go through the retrograde period, we feel like luck isn’t going our way, growth has stopped and maybe the ideas we had aren’t as good as they seemed. These problems and questions push us to go on an inner journey, so that our inner growth will match outer growth. Now that Jupiter moves forward again, so can our plans for expansion.

Mercury also re-enters Leo again on the same date, covering the final few degrees of the shadow zone of the last retrograde. It works well with the Jupiter in Sagittarius influence. We may feel more confident now about speaking up, telling our stories, showing off our ideas. Now’s the time to step up and be heard.

On August 12, Uranus stations retrograde. The action of Uranus is to change, upgrade, reform, update. Uranus looks at our Saturnian structures, those we have built solidly over time and with a sniff starts to kick them down. Old, old old – it’s all old and boring and my God I need something new in my life! Uranus alerts us to where we have got too constrained, limited, conditioned or just plain stale. Uranus is the Awakener whose ultimate aim is to give us the freedom to discover unique aspects of ourselves that we’ve held in check.

When Uranus stations retrograde, it may be accompanied by anxiety. We may become more conscious of where we feel alienated, detached or stuck. During the retrograde period, as with all retrogrades, the action moves to our internal landscape. It’s time now to reconnect with parts of ourselves that we’ve also alienated. Sometimes we can feel like a stranger in a strange land – everything is the same, yet everything is oddly different. It’s this odd feeling that often produces underlying anxiety. The retrograde period gives us a chance to realise that it’s us who is changing, and we need to move with the times. The more we fight against Uranus, the more chaotic this transit can be.

August 14 sees a conjunction between Venus and the Sun in Leo – a starlet aspect if ever there was one. Now we need to let our hearts shine and radiate our inner beauty. As Venus sits on the throne of the Sun, we are paying homage to what we truly value in our lives. Honour your deepest values. Look to where you can bring forth more love and light into the world.

The Full Moon in Aquarius on August 15 could bring issues of restriction, set in motion by Uranus stationing, to a head. The Moon in Aquarius needs space. Emotionally we’re drawn towards new avenues of exploration and a need for new perspectives. Under this cool, detached influence, we don’t usually care too much what others think but a gathering of planets in opposing sign Leo could mean we’re more invested than usual in other people’s reactions. Alternatively, this pattern could accentuate feelings of alienation and difference as it seems like everyone else is getting the praise we’re secretly craving. Still, Mercury also exits the shadow zone on this date shortly before the Full Moon, so it’s likely that minds are clearer and there’s an urge to start again with plans and projects or to say our piece, even if it’s controversial.

Mars enters Virgo on August 19 starting a domino effect as we move towards a big pile up of planets in this hardworking sign. With Mars here, it’s likely that all our energies are going into the day job, daily routines and appointments. Maybe we’re motivated to fix things up – our lives and health included. We can certainly achieve a lot during this time, it’s a DIYer’s dream – the only catch is that sometimes we don’t know when to stop. Mars in Virgo can have a tendency to burn out in an effort to make everything perfect. Don’t forget to rest.

Jupiter semi-sextiles Saturn on August 19 too, a minor aspect but notable as this is the last aspect between these two until the conjunction in December 2020. This is also the final semi-sextile in this series of three. Jupiter and Saturn become neighbours under this 30-degree aspect. Each are at home in their own signs and exchanging pleasantries over the garden fence. Saturn is helping curb Jupiter’s urge to go too far whilst Jupiter encourages Saturn to go beyond limiting boundary lines. In our own lives, we can make use of this aspect by considering where we may need better definition of goals as well as where we need to be more adventurous.

Venus then enters Virgo on August 21 followed by the Sun on August 23, Juno on August 24 and Mercury on August 29! Did someone call for improvements because we have the whole team here now?! Venus and Juno in Virgo may mean that in relationships we are less demonstrative than of late after the dramatic Leo influence. But still, it is the little things that count when we get into Virgo. Even if we’re not feeling that cuddly, thoughtfully making our partner a sandwich or cleaning up without an argument over who takes out the trash are ways that we can demonstrate our love for one another. The Sun’s passage through Virgo also suggests that we need to pay attention to our physical health. Maybe it’s time to tweak our diet or exercise regime to ensure we have the energy and nutrients we need.

Shortly after the Sun enters Virgo, we have the Last Quarter Moon urging us to make one final decision before we make our way to the next New Moon. The Moon in Gemini could vacillate between options whilst the Virgo Sun just wants us to get on with it and get back to work! With both signs ruled by Mercury, it’s all going on at a mental level – thinking, talking, possibly soliciting too many opinions. It’s a too many cooks spoil the broth scenario.

Still, it looks like the results turn out to be tasty as Venus conjoins Mars on August 24. Hearts and values are aligning with goals and actions – not to mention the fact that this is a rather lovely day to spend with partners. Yes, we might be clearing out the closet together but still, this is an affectionate and potentially passionate aspect – as long as we get the work done first of course 🙂

Pallas enters Scorpio on August 26 after nine months of diplomatic relations in Libra. Now we take Pallas’s creative and wise energy into the realm of personal complexes and shadows. Pallas’s sign shows us how we problem solve. In Scorpio we solve problems through deep investigation, detective work, shadow work, maybe even through occult knowledge and practice. Sometimes Pallas in Scorpio can literally solve problems in the dark, staying up late to think or turning issues over to dreams.

With Pallas’s entry into Scorpio, there are now no planets or major asteroids in air signs until the middle of September. Only the Moon passing through Libra (Sep 1 – 3) and Aquarius (Sep 10 – 12) will give us some air element until Mercury enters Libra next month. Maybe one way to sum up this influence would be that it’s better to do it rather than think about it. Actions will certainly speak louder than words for the next couple of weeks.

The month ends as it began, with another New Moon on August 30. This time the lights are joined in Virgo along with Mercury, Venus, Mars and Juno. This six-piece stellium in Virgo puts the emphasis on work and service. We need to seed new projects from a place of ‘what skills or knowledge do I have to offer the world? How can I heal myself to help heal the planet?’ The New Moon is supported by trines to industrious Saturn and free-thinking Uranus. It’s not close enough to form a grand trine but still, we’re open to experimentation whilst anchored by tradition. The only fly in the ointment is a quincunx to Chiron but with this much Virgo energy, no doubt we’ll whip us a remedy before Chiron can complain.