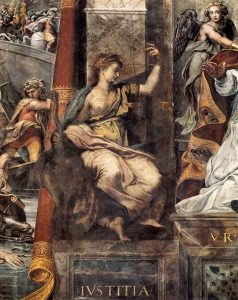 These are intense times.  The proroguing of the UK government has been ruled as unlawful, pulling the Queen herself into a messy position. Currently our sovereign has Pluto conjunct her Ascendant so between Boris Johnson’s attempts to deceive her over proroguing, David Cameron’s blabbing over personal conversations, not to mention her son’s involvement with the infamous Epstein, Her Majesty certainly seems to be feeling the weight of the Lord of the Underworld. In an extremely rare admission of emotion, the Queen has mentioned she is ‘displeased’ (this was in connection to David Cameron). Privately, I imagine she is raging with the whole darn lot of them.

With the final conjunction this year between the South Node and Saturn also taking place on the same day as the New Moon, the beginning of this lunar cycle is overshadowed by Saturn’s demands that we deal with important karmic business. Collectively we are all facing the results of past decisions, experiencing consequences, moving into a state of realisation as to where we need to take responsibility. It may be hard work but it’s necessary as we are clearing the way before the powerful Saturn-Pluto conjunction in January. But for some, these aspects may feel harder if they have been trying to dodge karma and consequence. Boris Johnson now must face an angry parliament and Trump is about to face impeachment proceedings.

I’m noting that in the UK it was a female judge, Lady Hale, who decided the prorogation of parliament had been unlawful. And, in the US, it was another woman, Nancy Pelosi, who has begun the impeachment enquiry on Trump. Meanwhile, Greta Thunberg gave all the politicians a good and thorough scolding. Her rallying cry and furious glares said everything many of us have been wanting to say for a long time! All these shifts express the energies of the North Node in Cancer which can symbolise women and children. It’s their voices that are challenging the Capricorn patriarchy, the system, conservatism. The Climate Strike poster that said ‘You know it’s time for change when your children act like leaders and your leaders act like children’ is like a direct channel of the Nodal placements right now.

The Sabian symbol for the South Node-Saturn conjunction is ‘An Ancient Bas-Relief Carved In Granite Remains A Witness To A Long-Forgotten Culture’. Interesting considering how fossil fuels are the topic of debate in the climate crisis. This symbol also points to historic moments in time and reminds us that great empires (the long-forgotten cultures) can indeed fall. Note too that minor planet Ceres is now out of bounds and therefore Mother Earth and her followers are no longer playing by the common rules.

So, the Saturn-South Node conjunction ticks loudly in the New Moon chart. The New Moon itself is in the sign of Libra. Most often we talk about relationships when we think of Libra and yes, this is the time of year when how well we work together emotionally and professionally is in the spotlight. But given the current circumstances, it would be remiss to leave out how Libra is also connected to justice, equality, fairness for all. With stern Saturn not letting anyone shirk their responsibilities, the New Moon feels tinged with legalities. It feels like Justice herself is presiding over our affairs and she doesn’t miss a trick. No one can pull the wool over anyone’s eyes under these influences. We can’t come to an agreement – either with ourselves or with another, until we have acknowledged and dealt with the past. We must see things as they are, not how we would like them to be. Some serious objectivity is required.

The New Moon is opposite Chiron, so it feels painful. We must address where compromises are needed. We need to look at what is broken. There’s got to be some give and take. A quincunx to Uranus brings anxiety but the potential for new perspectives if we can get past the hurt and fear.

There’s also an interesting asteroid duo conjunct the New Moon namely, Humpty Dumpty (Yes really!) and Isis. Isis had to piece her husband together again after he was torn limb from limb and his parts spread across the planet by his jealous brother. So, we have something broken that can’t be put back together again and someone who insists on trying anyway. We can see then where we may have a problem trying to fix something that can no longer be fixed. With the New Moon in Libra, we are drawn to keep the peace, to be polite, smile sweetly and say, “yes dear, it’s all fine”. But Chiron opposite is yelling in pain and we can’t just stick a band aid over his mouth. We need to acknowledge our pain – our own and each other’s.

The Sabian symbol of the New Moon is: –

The symbol reminds us of the power of the mind. It’s time to get clear about our intentions, especially with Saturn’s powerful presence in this chart. It’s like the skies are saying, no more bullsh*t! Get crystal clear about what is happening in your life and in the world. With Venus, ruler of this New Moon chart, square to the Nodes, Saturn and Pluto, it may seem as though there are some compelling reasons why we should stick with what we know, show caution, be diplomatic. But the Queen of Heaven is in her palace in Libra. When we drop into our hearts, there we will find the truth. Now is the time to act with the highest integrity. Focus on what is most important and honour your values. Create healing alliances. Through this, we can right the scales of justice and find our equilibrium.

Painting – from a fresco in the Sala di Costantino, Raphael Rooms by Raphael