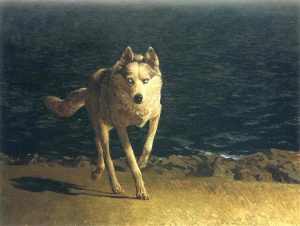 The Lunar Eclipse occurs at 19:21 (UT) on January 10, 2020 at 20°Cn00′. This is a penumbral eclipse meaning that the Moon will only pass through the outer part of Earth’s shadow. It creates then a partial eclipse and therefore the Moon will only look dimmer rather than taking on the familiar reddish hue associated with total lunar eclipses. Still, despite its partial status, this Full Moon Lunar Eclipse packs an astrological punch as it triggers the collection of planets now sitting in Capricorn and brings to life the Saturn-Pluto conjunction due to perfect in a couple of days.

The Lunar Eclipse is a time when we see the Earth’s shadow and therefore symbolically speaking, we see our collective shadow. As it’s Full Moon, the height of the lunar cycle, we already know this is a time of heightened emotions, more so with the Moon in her home sign of watery Cancer. As the Moon and Sun oppose one another, events come to a head, we draw conclusions, make decisions or reach a crisis point. With the North Node also travelling in Cancer, we have an idea that whatever is revealed now is for our soul’s growth. As Cancer is concerned with security, home, family, roots and domestic issues, these are the matters that we are most concerned with during this period.

Above all, Cancer wants to feel safe and secure, protected, nurtured, supported, but the oppositions to the Sun, Mercury, Saturn, Pluto and Ceres could feel like a wolf at the door – or rather a pack of wolves! There’s stuff going on ‘out there’ in the world and it’s howling to be let in. We can’t ignore it, and this could feel uncomfortable, scary, threatening. Note that Mercury is out of bounds which means it’s not playing by the rules and therefore minds whirl as nothing seems logical. Yet Mercury could also come up with some brilliant insights, especially as it conjoins the Sun today bringing important information to light.  Combined with Pluto’s natural depth analysis and Saturn’s wisdom, we have a recipe for profound realisations. Whether we want to know the truth might be a different matter but still, there are certain truths arising from this eclipse.

Taking these lunar oppositions one by one, what we think (Mercury) and feel (the Moon) are two different things. We feel denied, under the thumb of authorities or emotionally low with Saturn. The opposition with Ceres could feel like lack of abundance, feeling uncared for, hungry/hangry! Separation anxiety triggers needy reactions. Finally, the presence of Pluto is horror, pressure, the terror of things spinning out of control. We’re inclined to obsess and react without thinking, triggered by unconscious patterns.

On top of these aspects, there is also a tight sesquiquadrate to warrior Mars so part of us is gunning to take action, to MAKE it stop, to MAKE it better. Mars is fast and furious and isn’t looking where he’s going. Let’s throw in a square to Juno shall we, over there in peacemaker Libra? This is a suggestion that we need to review agreements, embrace diplomacy but whether that will be heard under all the noise of the rest of the planets is anyone’s guess.

And if that wasn’t enough, Uranus is about to go direct around 6 hours after the eclipse. Its stationary status gives an unpredictable edge and a whole bag of ‘expect the unexpected’.

It feels overwhelming so how about we consider the most positive potential of these patterns? We can see this as a significant opportunity to clear the way ahead if we dare to confront our demons (Pluto). It’s about reframing and considering, what can I learn from this? The confrontations with Saturn and Pluto push us to change habitual patterns of response. We need to let go of what isn’t in our control and take responsibility (Saturn) for what is. It’s about attending to matters at home without abdicating our outer world responsibilities. It’s about finding a good work/life balance. It’s about dealing with problems in an adult way rather than sinking into a bad mood because life isn’t going our way. It’s about giving love and support to each other so that we can deal with our fears together rather than alone.

You are not alone.

You are NOT alone.

Uranus stationing tells us that something important within is awakening. What occurs around this time is part of what will free us from whatever has been holding us back.

The Moon is also trine to Neptune, the one release point amongst these tense aspects. This tells us that right now we need to look beyond the mundane and see with our soul’s eyes. Intuition, imagination, art, prayer, music, rest, meditation, voluntary work, helping those who cannot help themselves – all these are activities that can help us make sense of the complex energies at play. As Neptune is also the planet associated with all that is holy, it brings with it a sense of quiet spiritual presence watching over us. We are all connected by an invisible thread so what we put out affects us all. It’s important that we find a place of peace within and send out unconditional love.

The Sabian symbol of the Lunar Eclipse is :-

A Famous Singer Is Proving Her Virtuosity During An Operatic Performance

This symbol brings up the idea of being heard. The Moon in Cancer would rather have a quiet word behind closed doors but now isn’t the time to hide our voices. We need to clarify our message and then project it loud and clear. The virtuosity of the opera singer in this symbol also tells us that to give our best performance in life, it takes work. With all this powerful Capricorn energy in the skies currently, we can’t shirk our duties, tasks or responsibilities both at home and at work. Still, the more we apply ourselves, the more we can achieve. This eclipse is a cosmic tune up and a wake-up call. Stay on the high side.