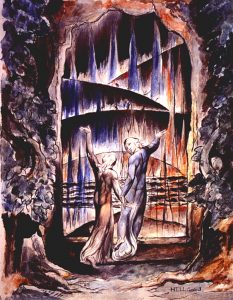 Apparently British Conservative MP Mark Francois wants Big Ben to ‘Bong’ at the hour the UK leaves the European Union. I would suggest that unless our MP’s start talking about stuff that matters, like the Climate Emergency, there’s a whole other ‘Bong’ that will be happening – namely the death knell of the Doomsday clock. The Doomsday clock originated under a previous Saturn-Pluto conjunction. Still, it’s interesting that the clock symbolism has surfaced as I spoke about it in my January Forecast.

The mundane world symbolism as Saturn conjunct Pluto perfects (January 12, 2020), is extraordinary to say the least. In my forecast for January 2020, posted originally on my Patreon on December 15 and on Youtube on December 28, I talked of how this time period relates to the possibility of war and is also a marker in time for the climate crisis. And so, Trump decided to bomb Iraq, killing a much loved Iranian General, notably on Greta Thunberg’s birthday – the very person who is the figurehead for the Climate Crisis. War or save the planet? I feel like I’m in Eddie Izzard’s sketch ‘Cake or Death’ only it really isn’t very funny anymore is it (war, not Eddie – Eddie is always funny).  By the way, if you are curious enough to click the link to the sketch, note that Eddie is a big fan of F bombs 🙂

Hashtag ‘WorldWarIII’ began to trend on Twitter. Trump is currently in the midst of his Saturn opposition to natal Saturn so following the rules and listening to other authority figures probably feels like an outright threat right now. Throw in Pluto too and we get ‘I want to smash any opposition into little pieces’. Of course, it’s clear to see through the distraction. We haven’t forgotten the impeachment and neither has Trump. After all, there is significant opposition to his authority right now and any distraction is welcome from his point of view. Whilst currently it seems that the war-talk has cooled, astrologically speaking, I don’t think this is over – not by a long shot, especially as Mars will trigger the Capricorn build up in March and then again later in the year when Mars is retrograde between September and November. 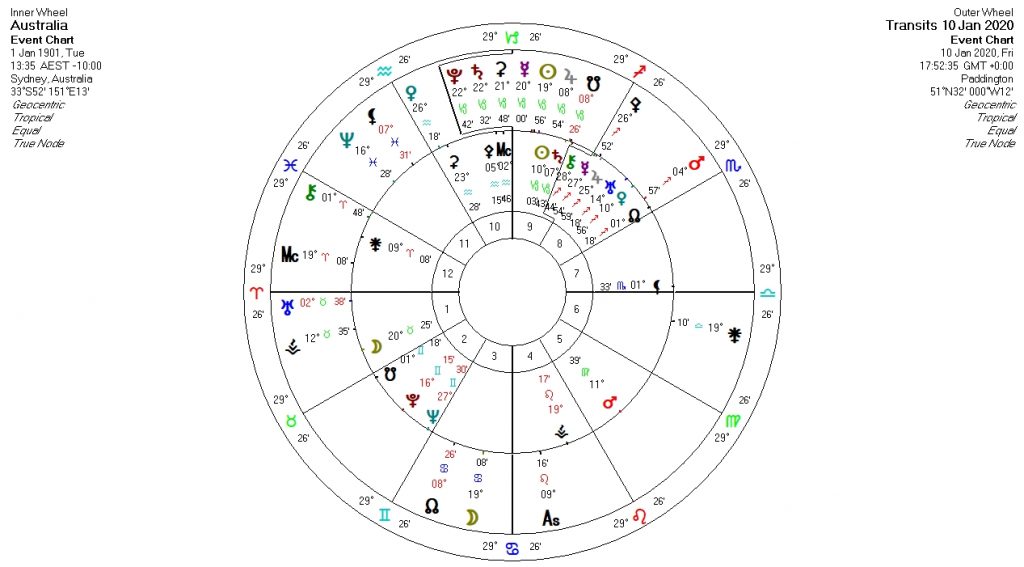 Meanwhile, the terrible fires in Australia have caused untold damage to flora and fauna and devastated many people’s lives and livelihoods. If you want to make a donation, there are a list of agencies accepting donations here. The huge story here is that the Prime Minister of Australia, Scott Morrison, is yet another Climate Change denier, much like Donald Trump and even faced with a disaster on his doorstep, he refuses to budge. Naturally, his response (or rather lack of response) hasn’t been well received by the people of his country. Currently Jupiter conjunct the South Node sits on the chart of Australia’s natal Saturn and Sun. Time for the man at the top to release old beliefs!

Astrologically speaking, powerful denial is a phrase that can be drawn straight from playing with Pluto and Saturn’s keywords. In our very dualistic world, every action has a reaction, every opinion, its opposite. But, in the face of such a serious aspect as Saturn conjunct Pluto this is ‘time’s up’. No more bullsh*t. Mother Earth (Ceres) is integral to this Capricorn stellium and the Saturn-Pluto conjunction. Note that Ceres is also out of bounds currently meaning that Mother Earth isn’t going to play by the rules anymore – after all, where has that got her? Nope, Mother Earth is yelling at the top of her voice and we must listen. Popocatépetl just erupted and Puerto Rico is still reeling from being hit by an earthquake swarm – 950 earthquakes since the beginning of the year!

But those in power (Pluto) with authority (Saturn) don’t want to listen because they stand to lose everything because Pluto is also wealth. It’s the kind of wealth that sits beneath dragons in age old stories. But the dragon’s head (the North Node) is in opposite sign Cancer – a sign associated with family, nurturing, mothers and children. Even the fairytale dragon has heard the cry of the little child (Greta) and is stirring its age-old body, relinquishing it’s silver and gold with the promise of something much more precious. Those who are determined to hold onto the dragon’s tail are likely to be on the tail end of something more unpleasant! No doubt some karmic lessons will be learned. 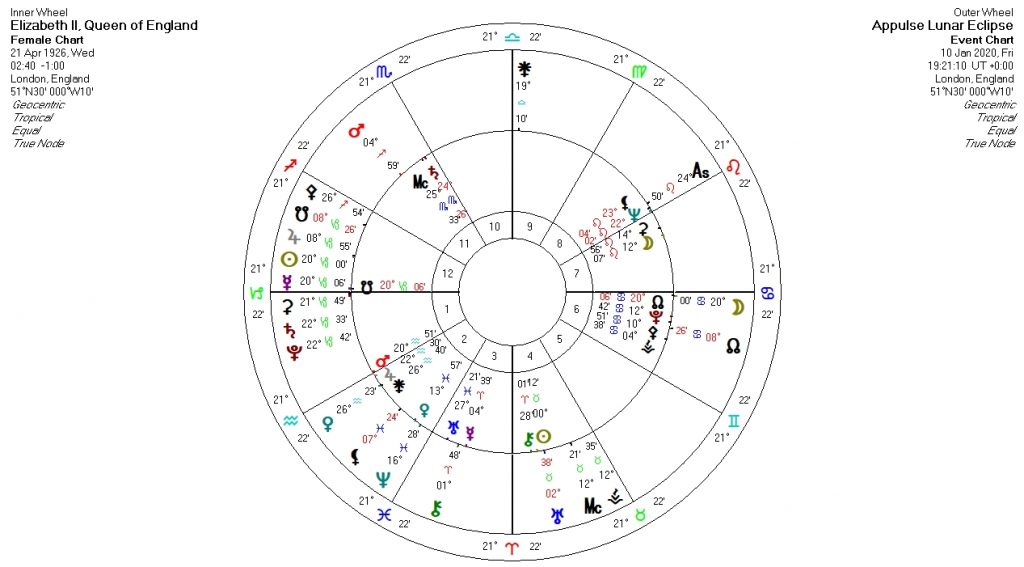 The headline news for the past 48 hours though has all been about Harry and Megan’s unprecedented announcement via Instagram that they are stepping back from being senior royals. Mercury, the planet of communication and a player in the Saturn-Pluto quintuple conjunction, is also currently out of bounds. Remember what I said about out of bounds Ceres above – breaking rules? Mercury’s joining in. What a way to break the news!

The Queen’s chart is already besieged by Saturn’s conjunction to Pluto which occurs right beside her Ascendant. The presence of Pluto here has already been hard at work, ferreting out the unsavoury truths about son Andrew, that disastrous (which literally means ‘against the stars’) interview, followed by a decision to secret him away from public view. The Queen’s husband Prince Philip was in hospital before Christmas and looks rather frail. And now Harry has decided not to toe the line anymore forcing change in the ‘Firm’ the Queen’s name for the Royal Family business (Saturn). Note too that Uranus is still idling two degrees away from the Queen’s natal Sun. Rebels everywhere. Talk about being hit by a few curveballs. 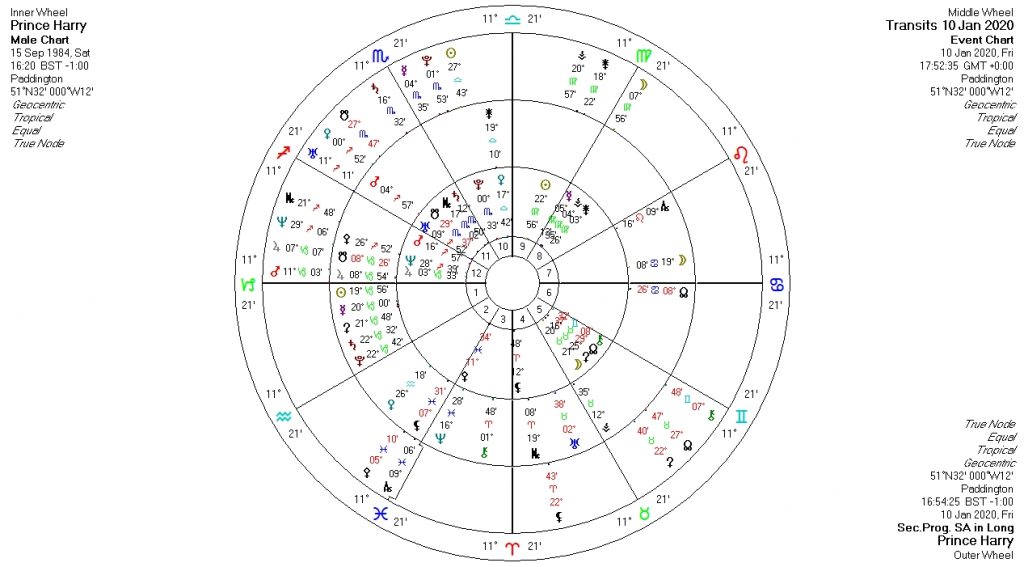 Apparently, there is upset in the Royal Household as sources state they were not consulted about Harry and Meghan’s decision. It begs the question – why? Maybe the couple decided it was easier to ask forgiveness (Neptune) than ask for permission (Saturn). Right now, Harry is just coming to the end of a series of difficult squares from Neptune to his natal Mars. The third and final square will take place on January 27. Neptune and Mars in difficult aspect can typically manifest as feeling defeated. Harry and Meghan would much rather follow their hearts and do more charitable work – a wonderful expression of compassion (Neptune) in action (Mars). Harry’s natal Mars is in adventurous, unshackled, multicultural Sagittarius, in the 12th house of the lost and forgotten and spirituality. In his progressed chart, Harry’s Neptune is on the 29th degree of its sign, emphasising that the desire to help and do something meaningful with his life feels critical. Note that the Saturn-Pluto conjunction in his first house of ‘self’ will be directly trine to Harry’s Sun (purpose, identity), helping him step into his own power and authority. Jupiter will shortly ender his 1st house and can often correlate to creating one’s own opportunities as well as international travel. The astrology is perfect for the situation. Also worth noting is that in Harry’s progressed chart, Mars is lingering on his Ascendant, making ready to move into his first house later this year. No doubt as transiting Jupiter is already speaking with his progressed Mars, this is the boost of courage he needed to take charge of his life.

The times are extraordinary as the astrology right now and everything links, everything is connected. I also mentioned in my January forecast when talking about Saturn and Pluto that there had been a link to aliens so it caught my eye to see news headlines erupt with a story ‘Aliens exist and could be here on Earth‘ – the words spoke by former astronaut Helen Sharman. If they do, I’m pretty sure they might be shaking their little alien heads right now and wondering what the hell is going on. I know I am!

But still, whilst the news is wild, challenging, infuriating and bizarre – let’s not forget Uranus stationing on the heels of today’s (Jan10,2020) lunar eclipse – what matters is that we plant our feet firmly in the ground. We may not be able to directly stop our leaders from playing with dangerous buttons, tweeting nonsense or having pointless discussions whilst people and the planet suffer – but we can make a difference. We aren’t powerless, even if the news is sometimes carefully cultivated to make us think we are. In fact Saturn conjunct Pluto counsels us that now is just the time to accept the responsibility of our power. What we do now will have repercussions long after we are gone. What we do now is for future generations. We need to be the change we want to see. It’s about stepping up. Releasing our fears. Doing what’s right. Commitment. Resolve. Digging deep. All the strength we need is inside of us. Together we can change the world and it starts right now.

Edited to Add Further manifestations of the Quintuple Conjunction :-

Apocalypse Cow: How Meat Killed the Planet – This documentary aired on January 8. Do check it out if you can as it is very inspirational! A direct connection to Ceres (and more than a nod to Uranus in Taurus)

Edit to add 24JAN20 The Doomsday clock has just been moved 20 seconds closer to midnight. I specifically talked about the connection between the Doomsday clock and the Saturn-Pluto conjunction in my January 2020 forecast on Youtube beginning at 18:24 minutes in the forecast (published 27DEC19)

A burst of gravitational waves hit Earth on January 14 and no one knows where they came from. Quote from the article “Gravitational waves can be caused by the collision of massive objects, such as two black holes or two neutron stars.”