Here’s the chart for Brexit and a few quick thoughts about it. 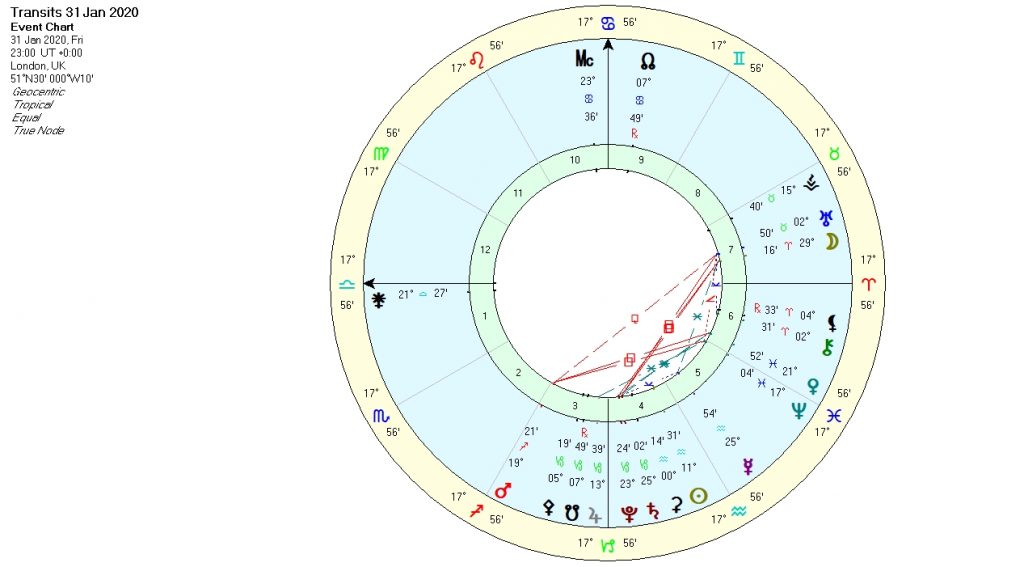 Libra Rising and Juno conjunct the Ascendant talk of a relationship/marriage.
The Sabian symbol of the Ascendant is Two Men Placed Under Arrest
Noting the play on words for arrest meaning ‘to stop’
Also of course noting the implied criminality in the Sabian.

Midheaven (where things are headed/reputation) A Woman And Two Men Castaways On A Small Island Of The South Seas
This Sabian can talk of too many people in one place, feeling hemmed in, lack of privacy, new kinds of relationships, castaways.

The Sun is UNASPECTED. In mundane astrology the Sun represents the Prime Minister, aristocracy and the monarchy. As the Sun is disconnected from all the other planets, it’s quite descriptive of how some of us think of our leaders! A common complaint is that the current party in power are out of touch with the common people. It is also descriptive of wanting to go it alone. An unaspected Sun however can also symbolise a crisis of identity.

Our closest neighbours are Scotland, Wales and Ireland and with Jupiter in the 3rd house square to the Ascendant-Descendant, maybe there is a suggestion that there are further developments to occur here. Note that there is emphasis on the 4th, 5th and 6th houses, the north western hemisphere. Maybe this indicates developments in the North West of England. Or maybe this suggests that we are finding new ways to express ourselves as a country.

The Moon has a supportive sextile to Mercury in the 5th house suggesting a general mood to take a gamble. There may also be surprising positives when it comes to the entertainment industry in some way. However this house can also be connected to high society and the house of lords so perhaps there are potential benefits there. Out of interest, the Moon rules the North Node, representing karmic developments – the North Node points us straight back overseas! And yes of course, there will need to be new agreements with other countries regarding trading and travel.

The Moon is square the Saturn-Pluto conjunction in the 4th house of home or rather homeland in this case. Intensity, seriousness, leadership, power issues – the people at odds with the state. Generally Saturn conjunct Pluto in the 4th house alone could also be seen as the desire to stand strong in our own power and reclaim our authority. Jupiter does form a bit of a buffer from the 3rd house and also is sextile to Venus so there are still some financial benefits coming from our neighbours (in Europe). However note that Pluto is the ruler of the 2nd house of money and as Pluto is still conjunct Saturn, it suggests austerity won’t over any time soon. Mars, the co-ruler of the 2nd house is also square to valuable Venus and even more problematically to Neptune. Mars square Neptune can spell defeat. Still, Pluto is in a sextile to Venus, in the 6th house of the country’s health service. So maybe this will serve to protect our NHS – funds coming in perhaps. Or it will provide an opportunity for it to be sold off to make money.

Ceres has just moved into Aquarius so there are new beginnings at home as far as farming and food production are concerned. The closest aspect Ceres makes is a square to the Moon so issues here might not sit well with the public. Note that Ceres is out of bounds meaning that she works in wild ways – either genius or criminal so we’ll have to see how that plays out.