In June 2019, as Saturn and Pluto were only three degrees away from one another and conjunct the South Node (old karma) a plague of locusts began in East Africa and Pakistan

“The infestation “presents an unprecedented threat to food security”. (Source in references at the end of this article).

The exact conjunction of Saturn and Pluto occurred on January 12, 2020 and was a quintuple conjunction between the Sun (illumination), Ceres (Mother Earth/food), Saturn (Lord of Karma/trials), Pluto (death/regeneration) and Mercury (mind/communication/news). Mercury rules the hands and lungs in medical astrology.

In my video forecast for January 2020, (released in December 2019), I explored the history of the Saturn-Pluto conjunction, noting that there are strong themes of war, hardship and conflict. I specifically referenced the Doomsday clock which speaks of human made catastrophe and noted the movies due to be released this year – Antebellum (a word meaning ‘before a war’), Godzilla versus Kong, A Time to Die, Black Widow. The films we make and art we create are born from the collective unconscious and it is here where the archetypal symbols we use in astrology live. With Ceres playing a prominent part in the Saturn-Pluto conjunction, I felt that it spoke of the climate crisis and our relationship with the planet. I said :-

“My sense is that this conjunction in January 2020 marks a point in history that will be a turning point – it’s either now or never, do or die. We have to take responsibility for our rubbish, clean up the crap, grow up”

The Sabian symbol of the conjunction was :-

A Soldier Receiving Two Awards For Bravery In Combat

In January 2020 the following events occurred :-

Astrologers knew that when Mars entered Capricorn on February 16 that this would begin to re-activate the Saturn-Pluto conjunction point. Things are heating up as Mars is marching towards his meeting with Jupiter due on March 20 and this meeting will take place exactly on the degree where Saturn and Pluto first met. Mars and Jupiter together can represent inflammation, things blowing up. Iran first reported confirmed infections of coronavirus on February 19, many of the infected are within Iran’s government with multiple senior officials infected.

The war between the US and Iran may have faded but the conflict remains.

The story of the planets must play out as we haven’t yet learned the required lessons. 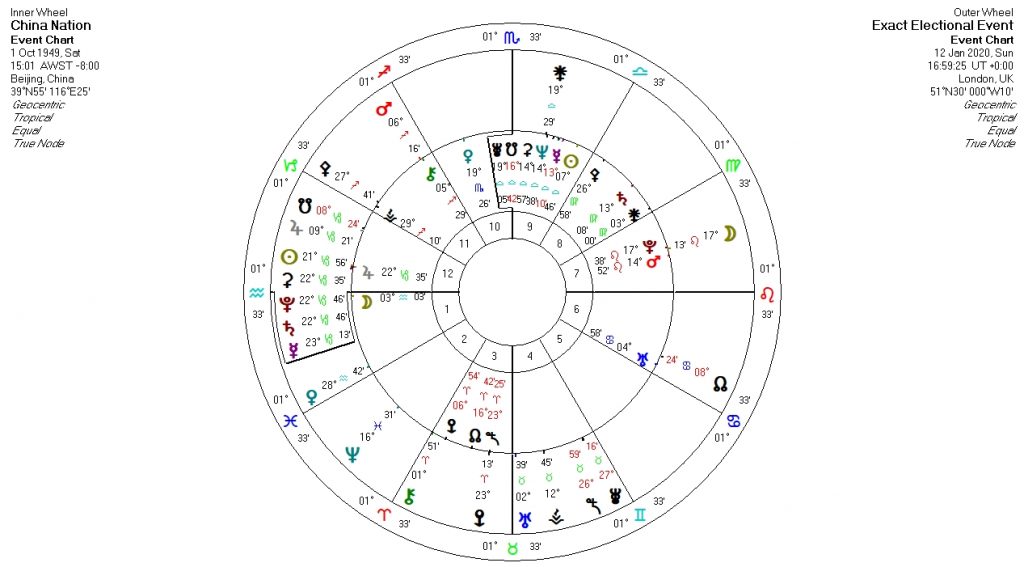 The Saturn-Pluto conjunction was conjunct China’s natal Jupiter in the 12th house – a house associated with wild animals, nature, unseen enemies. Note that Ceres was exactly conjunct Jupiter to the degree and minute. The working theory is that the disease was able to jump from animals to humans because Wuhan market sold wild animal meat.

It seems fitting that this story begins in China, the country with the worst pollution on the planet and one of the worst reputations for its treatment of animals. Rape (Pluto) the planet (Ceres) for wealth (Pluto) and authority (Saturn) and you’ve got yourself a problem. China may be at the centre of it, but no country is without blame. The system planet wide needs to change. In the wake of the coronavirus, China has banned the trade in wild animals for consumption (although still need to go further to include the trade in wild animals for supposed medicinal benefits).

Jupiter in mundane astrology is connected to the nation’s wealth along with belief systems. So, Saturn conjunct Pluto made a point of striking at the heart of wealth in China, a wealth that has come from a complete disregard for the planet. As a consequence of the enforced quarantine as the virus has spread, satellite photos have shown a dramatic drop in polluting nitrogen dioxide levels. On the heels of this, the makers of the movie ‘A Time to Die’ announced a delay in its release – death delayed, how interesting. Symbolically then the virus has already shown us the potential for healing i.e. clearing the air will significantly lengthen our collective life span. Note that the virus itself attacks the lungs, perhaps because we are ‘choking to death’ on our own pollution. Out of interest, my grandmother, who died of lung cancer by the way, always used to say that grief is held in the lungs. It seems that there is collective grief as well as fear at work.

The Saturn-Pluto-Ceres conjunction clearly demonstrated that if we don’t change our ways we will be forced to do so because there is a natural balance in the universe. Pluto doesn’t mess about and neither does Saturn! This is a stonking great reality check and yes, it is hard. Karma though isn’t about crime and punishment, it’s about consequences and learning lessons for our soul’s evolution. The ‘disease’ is a manifestation of our own toxic system. The wild inner animal is biting back because we have ignored our essential nature for so long.

We’re being told to wash our hands over and over again and there’s two ways this phrase could be seen on a symbolic level. Positively, we need to clean up our act! Hygeia, Goddess of hygiene and cleanliness entered Gemini (a sign ruled by Mercury) on February 23 and will remain there until June 11. Negatively, we want to ‘wash our hands of it’, pretend it isn’t a problem, just make it go away.

Another of the solutions to help with containment (note that containment is associated with Capricorn as it rules structures and walls) is isolation. In anticipation of the need for self-isolation or enforced lockdowns, supermarket shelves are being emptied as people stockpile food (Ceres!) and toilet rolls. I mentioned in my video that one phrase that could be applied to the Saturn-Pluto conjunction would be the sh*t just got real – and that seems to have manifested perfectly as a reel of toilet paper! Symbolism in waking life works just like symbolism in dreams with many layers of meaning and plays on word puns!

So, what’s coming next? As mentioned above, Mars will join Jupiter on March 20 which could see a jump in cases or the announcement of a pandemic. Saturn then enters Aquarius on March 22 until the end of June. Aquarius rules groups, society and freedom and Saturn rules limits and restriction so it is possible that we will see new (Aquarius) rules (Saturn) further restricting group gatherings. Jupiter will then conjoin Pluto on April 5, the first of three conjunctions this year. The shadow of Jupiter-Pluto can link to stockpiling and hoarding of resources.

It’s possible that Jupiter conjunct Pluto connects to increased (Jupiter) fear (Pluto), enormous (Jupiter) crisis (Pluto) and more extreme measures. However, it would be nice to think that we could tap into the high side of this combination which could give us valuable resources, wealthy benefactors, powerful hope, knowledge is power. Regeneration comes from letting go of old belief systems. Don’t forget that Jupiter will also sextile Neptune this year, a helpful aspect that invites us to have faith, believe in one another – not to mention having faith in the wisdom of the cosmos and nature itself. There is a bigger pattern. We need to dip into that sensible Capricorn energy and approach this situation with maturity and honesty. We made the mess. We need to put it right.

The beauty of astrology is that it shows us an unfolding story. It’s not about throwing our hands up in the air and saying, ‘ah well, it’s all fated, nothing I can do’. There is always a choice in how we respond to the energies at work. Choices are going to be important this year as the North Node will enter dualistic Gemini in May. Our evolution depends of educating ourselves, dialogue, curiosity, gathering information. As the South Node will enter Sagittarius, we must let go of old beliefs that don’t serve us anymore. We may also have to move away from globalisation (Sagittarius rules other countries and far away places) and focus more on our local communities (Gemini rules neighbourhoods). Perhaps now is the time to really expand those community gardening enterprises, planting food and trees to bring health and healing. It doesn’t escape my attention that heavily polluting international transport systems such as aviation and cruise ships have been hard hit too by the virus outbreak with one large company Flybe collapsing entirely. Holidaying closer to home may well become more of a necessity when the North Node enters Gemini.

One problem I see right now is that many seem locked into the story about the disease – whether we are being lied to, whether it’s real, whether it’s really that big of a deal or worse than we’re being told. We need to look deeper at the symbolism of the entire event rather than tear strips off one another. Exploring the symbolism of planetary events tells us one thing for sure – healing and sickness, problem and solution, they are just two sides of a coin. It’s all about how we look at things. Yes, coronavirus is a threat because our infrastructure is already under serious pressure (thanks to Pluto in Capricorn). It’s not the amount of deaths but more the pressure it puts on our health services (regardless of which country you are in). But this kind of situation also exposes the ugly underbelly of society too – the insidious racism, the lack of education, the deep suspicion we have of our media and politicians. Our society is deeply divided and in the midst of this, the powers that be have made the rich richer and the poor poorer. Under this level of threat, markets crash, systems fail and someone, somewhere makes a buck off the back of those who are broken.

Perhaps the real virus is the fear that we pass on to one another, a touch here, a look there. Fear is the real sickness in our society. Fear of spending time alone with ourselves. Fear of each other. Mother nature has forced us to stop touching because our hands have been cruel to her progeny, just as Pluto’s grubby hands abducted and raped Ceres’s daughter, we plundered the planet. But now is a chance to cleanse ourselves and release the terrible grief we hold in our hearts, minds and souls. The meaning of the word ‘apocalypse’ is ‘revelation’. Saturn and Pluto have revealed their hand in the game of life and what it tells us is that this is a opportunity for change, not a death sentence.

The warmest January on record https://www.ncdc.noaa.gov/sotc/global/202001

Painting – ‘Detail from The Creation’ of Adam by Michelangelo