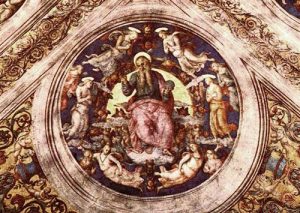 April begins with Venus moving out of bounds on April 2. Having gone beyond the path of the Sun, it indicates that Venus is now beyond the normal rules of play. I have to say that it resonates in the current climate of social distancing as the normal rules of relating have changed in society. Venus also represents money and right now we are in a potential financial meltdown with all bets off the table. As Venus then moves into Gemini on April 3, we may feel divided, torn between two equally attractive paths. Generally, relationships become more intellectually driven. For love to thrive, we need to talk, share stories, feel understood.

April 5 sees the biggest transit of the month with a monumental conjunction between Jupiter and Pluto. Jupiter is not at its best in Capricorn. Normally this is a planet of abundance but there are restrictions to how far Jupiter can go whilst in this self-contained, Saturn-ruled sign. Therefore, some of the positive energy we normally associate with Jupiter is mitigated – but that doesn’t mean there are no positives to come from this at all.

Jupiter increases or expands upon what it touches so, moving from the most negative to the most positive, we could experience scenarios such as: increased fear; increased control by the powers that be; a deepening of the current crisis; economic crisis/the movements of gigantic amounts of money (Jupiter and Pluto are both associated with wealth); publication of secrets; intense developments; a huge transformative moment; a momentous catalyst; great faith in the face of great fear. Maybe that’s the point, we’re encouraged to look fear in the eye and meet it with faith – hard I know when the whole world as we knew it has changed but still, this is an opportunity for regeneration. Don’t forget that Jupiter is the Greater Benefic, Zeus, the most important of all the Gods. From up there, Zeus has access to the bigger picture. The intense changes we are experiencing here on planet Earth are more understandable when we look at the bigger picture. For example, we are already seeing that the air is clearer as human movements are restricted. Dolphins are playing in the now beautifully clean canals in Venice. Deer wander quiet streets in Japan. I’m sure many of us have seen the meme going around about how Mother Nature is being given time to heal. Not only that, we are all in many ways being given time to pause and reflect, face some of those inner monsters that get shoved away in favour of excessive consumption, working too much and toxic relationships. Yes, great transformation is possible if we dare to look within.

Mars square Uranus on April 7 is an unstable mix with an unpredictable edge. It’s rebellious, heated, driven towards independence and freedom. It’s possible we may see some pushback against some of the extreme measures in place. Generally, we need to be mindful that change cannot be rushed, nor can we hurry the future along!

A Full Moon in Libra on April 8 calls for balance, diplomacy, fairness in the face of heated, selfish behaviour. We must find a way to compromise to protect the needs to individuals without damaging our relationships. It’s a challenging picture though as the Full Moon squares the Jupiter-Pluto conjunction, effectively activating this powerful duo. As Libra can also be associated with the law as well as Jupiter, it does make me wonder what further laws may be passed during this time, especially if things are feeling like they are spinning out of control. For all of us, it is important that we remain as centred and calm as possible and follow Libra’s simple instruction – be nice to one another. In the background we do have a helpful Mars-Chiron sextile which also perfects on the date of the Full Moon. We need to be proactive about healing and helping.

Mercury moves into Aries on April 11, giving us all a desire to speak our minds. After an extra-long period of time in Pisces, this could feel like we’ve acquired some mental clarity. Perhaps information comes through that gives us a boost, a sense of what we’re fighting for, a goal, a new idea or inspiration. The mind tends to work quicker under this influence so if we’ve been feeling undecided or stuck, the Aries energy will no doubt clear the way as unlike Pisces, it’s not open to second guessing itself. Mercury in Aries, decides and then proceeds, not looking back and wondering.

Another flashpoint comes on April 14 and 15 as the Sun squares first Jupiter and then Pluto, again activating this dynamic conjunction. The Sun’s square to Pluto could bring us into confrontation with forces beyond our control. Instead of wasting our energy fighting this (the Sun is in combative Aries!), we need to focus instead on what constructive changes we can create. There are deep inner resources available that we can tap into. As the Sun squares Jupiter, we need to be mindful of excess – maybe it is around this time that issues regarding stockpiling and panic buying could come to a head.

On April 19 the Sun enters Taurus and finally we start to see a dialling down of the heat that has been so present for the past month or so. Taurus appeals for calm. Relax says Taurus – take things as they come, ground yourself, be present, make time to smell the roses. This transit also asks us to attend to issues around security and resources. Taurus is slow moving but practical, so we need to be methodical in our approach and patient. This message becomes even more important as the New Moon in Taurus on April 23 will square Saturn, still in its first few steps in Aquarius. Personal security may seem to conflict with social responsibility or group rules. There are also out of sign squares from the Moon to Jupiter and Pluto too so although less intense than the Full Moon earlier in the month, we’re still conscious of any perceived ‘threat’ to our security.

Pluto stations retrograde on April 25, beginning its yearly backward motion. In retrograde motion, Pluto’s action is internalised, and it gives us time to process the changes we have experienced whilst Pluto has been in direct motion. Pluto will remain in retrograde motion until the beginning of October, giving us a long period of time to explore the deepest aspects of ourselves and deal with our shadows.

The final movement of the month is Mercury’s ingress into Taurus on April 27. It has the effect of slowing speeding thoughts and gives us time to consider our circumstances fully. Mercury in Taurus doesn’t always say much, but what it does say has often been mulled over for quite some time before being uttered. Decisions now are very practical, and we tend to have a more common-sense approach to life. The only downside is that we can also get into grooves of thinking that resist other ways of seeing things. We must remain mindful of becoming blinkered.

Painting – ‘God the Creator and Angels’ by Pietro Perugino