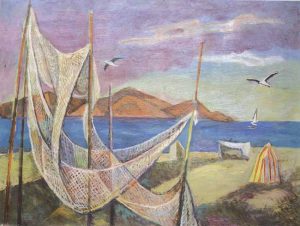 This is the first of the eclipses in this season. A lunar eclipse occurs at a Full Moon, so we are dealing with culmination, crises, decisions, high points. This eclipse will be hard to spot with the naked eye as it’s a penumbral eclipse but astrologically it does pack a punch.

The Moon is in the sign Sagittarius. This is a mutable (changeable/flexible) fire sign – spirited, restless, visionary. In Sagittarius we’re focused on the big picture. We’re looking at issues connected to international travel and transport, foreign cultures, publishing, promotion, morals and laws, philosophy, religion, faith and belief. The shadow side of Sagittarius is indoctrination, assumptions, arrogance, holier than thou attitudes, preaching, recklessness, over-reaching, ‘above the law’.

The Moon opposes the Sun in Gemini – an air sign focused on communication, dialogue, information, education. To resolve the tension between these two placements we need to listen to each side of a debate, be open to learning and new information, balance wide angles with fine details. With the Moon also opposing retrograde Venus in Gemini, this journey isn’t necessarily comfortable. I watched a video discussing racism recently and one speaker named Rev. Deborah Johnson said that “we can’t heal what we don’t feel”. Right now, we’re awash with feeling – perhaps precisely because there’s so much healing that we need to do. Venus retrograde in Gemini is prompting us to look at where we have disconnected from each other at heart level. Mercury will form a sextile to Uranus and a square to Chiron on the same day as the lunar eclipse – instructing us to open our minds and consider alternative perspectives, even if some conversations are hard or the topics discussed touch on our own sense of vulnerability. 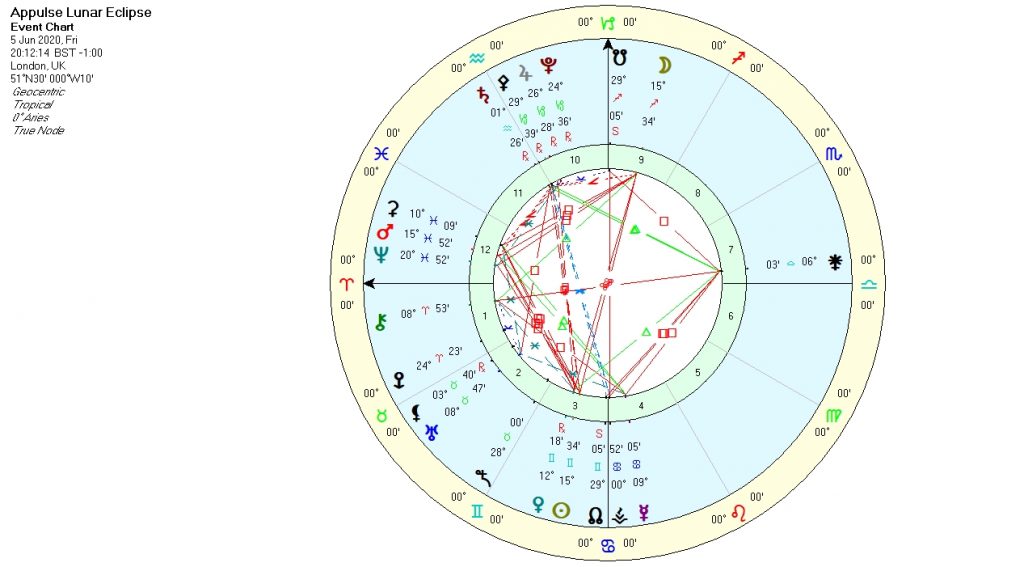 Mars in Pisces makes a tight square to the lights, turning this eclipse chart into T-square. All the tension from the Sun and Moon are poured into Mars. The Sun and Mars have already been in orb of a square since May 13 and it’s clear from planetary events that anger and frustration have been building. This T-square pointedly raises the question ‘what are we going to DO’? Whether the issue is a collective one or a private one, this chart tells us that something needs to be done.

Mars is about goals, action, will, desire, passion. Mars is how we fight and how we defend ourselves. Naturally, he can be hot-headed, impulsive, apt to act first, think later. But in Pisces, some of the fiery energy is dissipated and as we’re drawn towards unity, peace, charitability, spirituality, helping, the collective. Pisces is the place where all differences fall away and we are one.

Neptune, ruler of Pisces, is also part of the picture, conjoined with Mars and therefore also squaring the Moon and Sun. Under this stressful pattern we have issues of deflection, deception, disappointment, loss, confusion, helplessness. Ceres, the Great Mother is also part of the square. We need to nurture our sense of connection to one another, cherish one another. We are all made of the same star stuff.

Sea Gulls Fly Around A Ship In Expectation Of Food

This symbol speaks of unequal relationships, dependency, co-dependency. We need to explore where we are inadvertently supporting relationships with an unhealthy bias. In our own lives too, sometimes we look to others to provide us with something that we could provide for ourselves creating an unhealthy dynamic.

It’s also a time to address our expectations, whether we are expecting too much or too little. The square to Neptune from the lights can go other way. Either we’ve lost touch with reality, in which case we could be in for a disappointment, or we’ve lost so much faith that we’re dreaming small, afraid to barely dream at all. With the eclipse in Sagittarius, square Mars, it’s about holding a vision and intention, having the courage to hope. Mars in Pisces fires up imagination and asks us to use our imagination as a tool.  But as the South Node also lies in Sagittarius now, we must be willing to let go of belief systems and laws that don’t serve everyone. As Jupiter, the ruler of Sagittarius is retrograde, we must question the reality we have built and consider how we can build something better in the future.

I also did an astro-tarot reading for this lunation over my my Patreon. If you would like to join to gain access and listen, click here