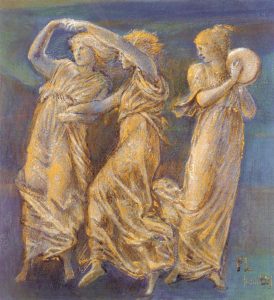 We reach the midpoint of Mercury’s retrograde through Cancer on July 1 as the Sun and Mercury meet in an inferior conjunction. This is the moment when Mercury sits on the throne of the Sun, elevated, illuminated, touched by God, receiving wisdom from the creator. This is often the time when we too receive some essential wisdom that clarifies the Mercury retrograde meaning for us. New information comes to light or new ideas appear from nowhere. Whilst there is still more time ahead for review and reflection, the emphasis has begun to shift as we start to look more ahead than behind. Mercury’s square to Chiron on this date too could mean that what we hear or perceive may be uncomfortable but still, this is a healing narrative.

Saturn re-enters Capricorn on July 2, putting Saturn on the anaretic degree of this sign. We are back to critical issues surrounding structure, foundations, establishments, limitations and responsibilities. I found it interesting that as Saturn began its retrograde in Aquarius, this is when lockdown started to ease in the UK. From the images I see today (I’m writing this on June 15, 2020), it feels like people are gradually regressing back to how things were. Whilst the queues to get into shops are socially distant and stores have installed Perspex screens and arrows for human flow, there’s still a strong sense of ‘back to normal’ in the air. But, as Saturn’s first foray into Aquarius has shown, there will be a ‘new normal’. Change is inevitable. Remember Saturn is Lord of Karma. Therefore, it’s important that we hold faith as Saturn returns to Capricorn to finish up the last of the business here which has been a long lesson in personal and collective responsibility. Saturn in Capricorn has been pushing us to mature, to stop doubting ourselves and learn what we are truly capable of when we work hard and commit. Saturn’s transit through the sign of the Goat has also shown us what is and isn’t working. Between July 2 – 16, these issues may become acute as Saturn exerts is authority here on this anaretic degree. After this time, Saturn will continue his retrograde in Capricorn, stationing direct on September 29 and completing the Capricorn journey on December 17, 2020 when he enters Aquarius.

July 5 sees the final eclipse in this current season. This will be a Full Moon lunar eclipse in Capricorn and the last of the Capricorn eclipses in this cycle. The next Capricorn eclipse will be in July 2028. This is a South Node eclipse, so this is the final revelation/gift/curveball that teaches us something important about the past and brings to a conclusion old karmic lessons.

Chiron stations retrograde on July 11, beginning a five-month backstep through Aries. When Chiron goes retrograde, this is an opportunity to check in with what is hurting as well as discover what our suffering has taught us. Whilst Chiron’s lessons are painful, we feel more integrated and whole once the lesson is complete. The areas of life that Chiron is working on collectively are around right action, assertiveness, anger, conflict, motivation, courage, toxic masculinity and our sense of being alive and vital.

As Chiron stations retrograde, Mercury stations direct on July 12 so over these couple of days we might not know whether we are coming or going! Still, Mercury’s station should help to release pent up emotions that we’ve found hard to express or think about as well as resolve any usual Mercury retrograde tricks.

The Last Quarter Moon in Aries on July 13 squares a triple conjunction between Pallas, Jupiter and Pluto. Between now and the New Moon in Cancer, on July 20, there will be a lot of activation of this trio as the Sun too will perfect oppositions to all over the coming days. The Aries Moon’s square to the Cancer Sun is tense because Aries is go-getting, out there, on it, all ready for a fight. But the Cancer Sun would prefer to focus on family matters and stay at home where it is safe. We’re trying to find a way to satisfy both these aspects to ourselves. The triple conjunction with Jupiter, Pallas and Pluto emphasises that we’re trying to understand patterns, trying to resolve crises, trying to use this as a great opportunity for change. At gut level, we know that we must stand up for what we need.

Mars conjoins Chiron on July 14, just as the Sun opposes Jupiter and then Pluto (July 15) so this is an intense period. Mars conjunct Chiron can represent taking action for healing as well as wounded warriors. The Sun’s opposition to Jupiter and Pluto however could magnify fears, especially if we’re feeling vulnerable – or we can recognise where we’ve taken on too much or over-emphasised problems. A fix is available if we’re brave.

The New Moon in Cancer is on July 20. It makes a tight opposition to Saturn and also opposes Jupiter and Pluto. This story seems strongly focused on finding workable compromises. This is a chance to make a new start, perhaps beginning a new chapter in our history. But it’s likely to test our resolve, strength and faith. There is however a trine between the New Moon and Neptune, a release point that asks us to go with the flow, surrender, listen to our intuition. The memories we make now will hold great meaning later down the line.

From here, the vibration begins to change. The Sun enters Leo on July 22, releasing us from some of the trepidation we felt during the Sun in Cancer period. Now we are released, we want to have some fun as the Sun moves through its own creative, playful sign! This is a time when we want to enjoy life, let our inner child out and indulge in pastimes and hobbies that bring warmth to the heart and a smile to the face. Take yourself on an artist’s date, create a party for one, go on a date (mindful of social distancing rules), watch your favourite movie, dress up and dance to your favourite music.

The last of the aspects this month all fall on July 27 and create a cat’s cradle of different influences. We have the First Quarter Moon in intense Scorpio squaring the Sun in child-like Leo. Despite the light in the background, we’re aware of deeper levels, shadows, fears lurking beneath the surface. As the Moon opposes Uranus, probably what is bothering us most is how life can be so darn unpredictable at times. The Moon in Scorpio likes to have everything under control. But sometimes we have to let go and let God, beautifully illustrated by Jupiter’s sextile to Neptune today too which brings in the opportunity for miracles and a growing sense of meaning and unity. This is the second in a series of three sextiles between Jupiter and Neptune which invites us to develop traditions, structures and establishments that increase a sense of connection and compassion.

July 27 is also the day we see the last in a series of three squares between Venus and Neptune. There’s been an ongoing story about looking at life through rose coloured spectacles, disappointment, chasing impossible dreams, an absence of happiness. Whilst we may have had to let some cherished dreams fall by the wayside, hopefully by now, we have found the answers we were looking for after a period of re-evaluation. At is highest expression, Venus square Neptune takes us to a place where the heart’s longing is fulfilled through finding spiritual meaning in our experience. Neptune is the higher vibration of Venus and the combination of the two speak of unconditional love. This aspect first occurred on May 4 so whatever was in the air then is brought to a conclusion now.