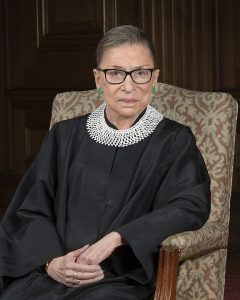 Ruth Bader Ginsburg was born with the Sun, Venus, Ceres and the North Node in Pisces. This is a sign strongly associated with peace, spiritual service, voluntary work, compassion and the collective. The old ruler of Pisces is Jupiter, a planet associated directly with law and lawyers. She also had a packed opposite Virgo house with Mars, the South Node, Neptune and Jupiter giving rise to a passionate desire to be of service.

Ruth was physically tiny but had immense presence and power (Sun trine Pluto). She became a national icon, was a feminist and fought tirelessly for equal rights.

Her extraordinary chart shows Cerberus, the hound of Hades conjunct Mother Goddess Ceres along with Heracles, otherwise known as Hercules – the strong one. Here we begin the see her fierce protective nature, the extreme loyalty to the cause, the defender of mothers. Dejanira (asteroid of victimhood) was conjunct her Sun yet despite going through her own trials and loss in life, she lived this energy to its highest level, fighting against discrimination. Vespa (wasp) also conjunct her Sun, ensured that she never backed down and had no qualms about standing up to others! Again, small but formidable!

A deeply in tune, powerful Moon in Scorpio gave her business acumen and nose for the truth. Elder Saturn widely conjunct wise woman Pallas ensures her lasting legacy throughout history.

Ruth Bader Ginsburg, thank you for your extraordinary service on planet Earth. Rest well with the stars.

Note, the chart is set to Aries houses as no time of birth is available.
Portrait source, wikipedia – public domain