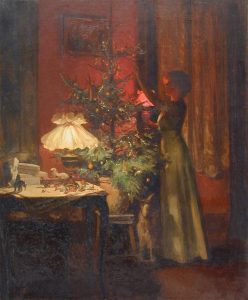 We are here, finally, at the last month of the most tumultuous year in living memory for many of us barring those who lived through the second world war! Writing that casts my memory back to my original forecast for January 2020, where I talked about the Saturn-Pluto conjunction and how it had many signatures of war and conflict. Whilst astrologers anticipated that 2020 would be a history maker, I don’t think any of us were fully prepared for what was to come!

But now we arrive at the final month of the year and another big shift. 2020 has been long and hard, stressful, upsetting, frightening but now comes the light at the end of that long dark tunnel.

Mercury starts us off by entering Sagittarius on December 1. After spending an extra-long period in Scorpio, no doubt we’re more than ready to get our heads out of Hades and back into the light. Sagittarius is a mutable fire sign associated with the idea of expanding our horizons. Whilst Mercury can struggle with a multitude of options for exciting adventures in this sign, we are at least thinking in a more optimistic way. As the mind expands, we start to consider the future, visualise where we want to go, think big. We also tend to talk big too, speaking with greater animation which is brilliant for both story-telling and philosophical discussion. However, sometimes we need to watch the tendency to brow beat as Mercury in Sagittarius can become moralistic when working in shadow. Bluntness can also cause friction.

The Last Quarter Moon occurs on December 8. We are now in the middle of eclipse season and at the turning point between the last lunar eclipse and the next solar eclipse. With the Moon in Virgo, we feel a need to ground ourselves from the wanderlust of the Sun in Sagittarius. Details too are important now although we need to also keep an eye on the big picture. It feels as though we need to make some careful decisions and choose a direction to travel rather than haphazardly skipping from one fun idea to the next.

Mars forms a sextile to the North Node on December 12. Now that Mars is direct, we can trust that our actions are helping us towards our soul’s evolution. What we do now is all part of our unfolding karma. It’s important to note that Mercury also goes out of bounds (OOB) on this date too which means that Mercurial energy goes beyond the rules of play so to speak. Issues connected to communication and information along with news, media, students, local transport and schools are all off the chart. OOB planets have an almost Uranian quality to them, a sense that anything and everything could happen both positively and negatively. So, we need to bear in mind that this energy is a little wild right now and remains so until January 4. Watch for inspired, impassioned speeches, big ideas, wild and spurious claims.

We have a solar eclipse in Sagittarius on December 14. This is an amped up New Moon, an important new start connected to beliefs, the future, international communications and travel, higher education, law and morality. The trine to Mars suggests we desire action but a square to Neptune is disorientating and can sap energy. Distraction and deflection are also Neptune problems. Neptune introduces uncertainty in that moment of darkness as the Sun’s light is eclipsed. A tight quincunx to Black Moon Lilith also brings up fears of being cast out, excommunicated, demonised, haunted. As this is a South Node eclipse, it feels a little like the ghost of Christmas past paying us a visit. Make peace with the past. Let go of old beliefs that are holding you back. Stop mourning the unlived life and start living.

Despite some of the challenges of the eclipse, there is a sense of onwards and upwards though. Venus joins the Sun and Mercury in Sagittarius on December 15 where she delights in the warmth of friendly connection and appreciates a no strings attached approach to relationships. In bonded partnerships, Venus in Sagittarius can bring some relief after an intense period. It’s time to have an adventure together! Following the heart now can lead to some exciting opportunities although we do need to check in with ourselves whether we are truly following our desires or just escaping from the humdrum.

Chiron stations direct, also on December 15. After a five-month period of intense self-questioning, painful healing and recovery, now we are ready to continue our journey. In forward motion, Chiron is still connected to healing, but his focus is more about taking what has been learned and applying it to our experience in the outer world. Yes, we may have scars, but in the receiving of these scars we also gained great wisdom. Consider, where can the actions you take in the wider world be a demonstration of your courage to overcome, to live and thrive despite pain? What can you teach? Where can you help?

The Great Conjunction itself begins a whole new chapter of human history. Aside from the conjunction between Jupiter and Saturn in 1980/81, all the previous conjunctions have been in Earth signs since 1842. Our upcoming conjunction though heralds the beginning of a cycle of Grand Conjunctions in the element of air that will take us through to 2140!

Jupiter’s action is to expand, Saturn’s is to contract, so in their meeting they have the ability to complement one another. Saturn cuts down on Jupiter’s tendency towards excess, Jupiter encourages Saturn to let down walls and break out of limiting constraints. All this activity will be focused on Aquarius, the sign associated with groups, networks, friends, social media, technology, science, politics, progress, advancement. Whilst Saturn in Aquarius may represent a ‘new normal’ as we come to terms with the pandemic, we also have the potential here for big developments that perhaps are born from the restrictions we have lived under. There is a sense that a new infrastructure is being created under this influence, one that may pave the way for Pluto’s transit of Aquarius beginning in 2023. Jupiter and Saturn in Aquarius presents the possibility of significant new advancements in society although the progress is likely to be slow and methodical (Saturn). Given that modern Aquarius ruler Uranus is associated with Higher Mind and intellectualism, we may also see a push towards education. Science and rational may be more favoured as we move forwards (but not, I hope, at the expense of creativity and spirituality).

However, it should also be noted that as Saturn (and Jupiter) will be squaring Uranus next year, we could also see unrest (Uranus), especially if authorities (Saturn) try to impose too many rules and restrictions. This is not just in response to coronavirus but may also be connected to finance, the internet and the general move towards living a more digital life. There is already a drive towards a cashless society, hastened along by the pandemic, but a continued movement towards this may be met with a backlash.

Generally though, the shift away from earth signs to air signs tells us that our emphasis is changing from the material world and capitalism to a period where we focus more on human connection, society, humanitarian causes and concepts. Hopefully, we may see the fall of fascism and authoritarian regimes and the demise of strong right-wing movements that have dominated these last years of Saturn (and Pluto) in Capricorn.

On an individual level, we could consider questions such as, what do I hope for in the future? What structures need to go in place to make this happen? Where do I need to experiment more? Where do I need to advance? How do I use technology in my life – does this benefit me or hold me back? Who are my friends? Who do I want to connect with and be associated with? What part do I play in society?

The Sun’s entry into Capricorn on the same day as the Great Conjunction also blesses this opening of new cycle in human history with even greater significance. This is the winter solstice, the shortest day and the longest night. After this time, the days will become longer until there is equal day and night at the Spring equinox. Symbolically then, this ancient festival of Yule is about the return of the light after a long period of darkness. And for final a cherry on top of the cake (or should I say star on top of the tree!), December 21, is also the date of the First Quarter Moon, putting the Moon slap bang on the Aries point (0 Aries). Whilst there is tension between the Sun and Moon, with Luna on the first degree of the first sign, it seems we have another indication here that this is a time of beginnings. The old order (Capricorn) is changing, and we’re inspired to make a new start (Aries). With old timer Saturn in modernist Aquarius though, it’s about taking the best of the past and putting it to work for our future rather than a complete revolution.

We come to the close of the year on the back of the final square between Mars and Pluto on December 23. This has been a tough aspect and one that has perhaps been the driving force of much of the heated atmosphere in the latter half of this year. Mars first began to engage conflict with Pluto back in July, pushing against an immovable force, wrestling for control. Now as we come to the end of this battle, we see what is possible and what isn’t – where we can take action and where we can’t. Yes, there is still some frustration here but the sense is that we are stronger for it. If we mobilise all our energy into what we can do, then we can enact powerful changes.

The final major aspect of the year is the Full Moon in Cancer on December 30. This lunation brings us to the conclusion of a family matter or emotional issue. Whilst yes there is a painful square to Chiron which means we may be even more sensitive and sentimental around this time, there is also a sextile to Uranus. We have an opportunity to take a different stance or road to break us out of old habits. Familiar patterns are changing and this, combined with Jupiter and Saturn in Aquarius, is the breath of fresh air we were waiting for.