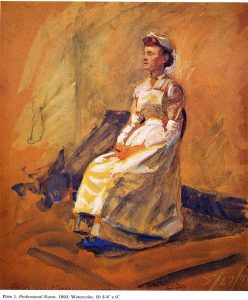 A 91 year-old lady was the first person in the UK to receive the Pfizer Covid-19 vaccine today. The time was 6:31 a.m. in Coventry. UK – Source BBC News.

Here are some brief observations about the chart – and it’s a fascinating one.

Firstly, Hygeia, Goddess of Health and Hygiene is just about to station retrograde at 16:08 UT on the same day and so is therefore already stationary. A stationary planet has added ‘weight’ in a chart and calls attention to itself. Hygeia is in the 9th house of the chart which speaks of the health of the world at large and it is in a helpful trine to Mercury (news) and the Sun putting Hygeia in the spotlight. Together with Mars in the 5th house of the chart, the Sun, and Hygeia form a Grand Trine, a promising pattern. Mars in the 5th house is the co-ruler of this chart as Scorpio is Rising and makes me think that this ‘action’ is about helping us to be able to get back to enjoying life – the 5th house is the house of pastimes, hobbies, the entertainment industry and fun. 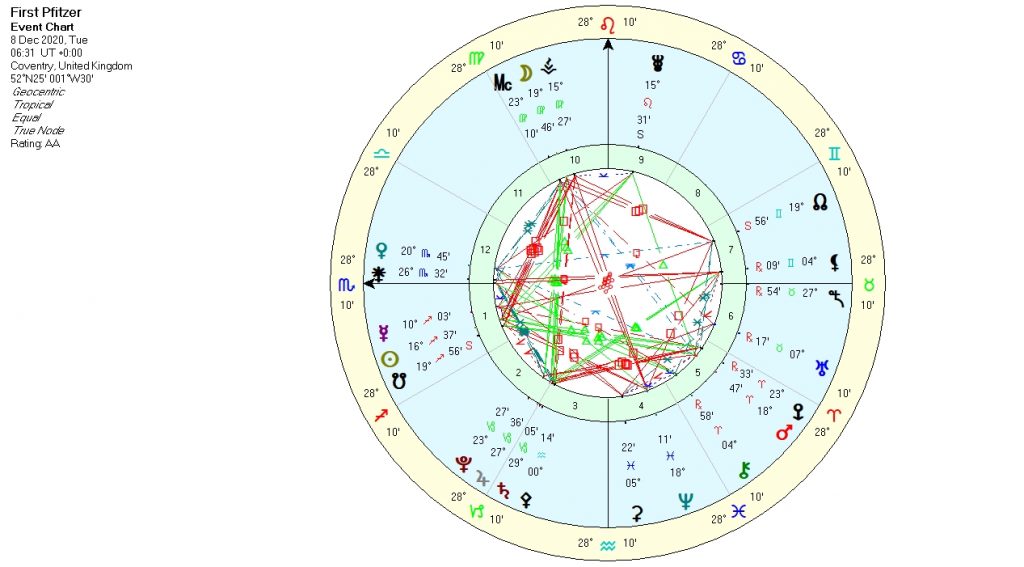 Pluto, the modern ruler of this chart is in the 2nd house, still conjunct Jupiter. Not only does this speak of the huge financial investment that this has taken but also that this is simply about survival. The 2nd house is about life, Pluto (and the 8th house) about death. We don’t want to die, we want to live! Jupiter gives us hope and this duo also stands for microscopes and telescopes, the ability to see into that which has not been seen before. Scorpio rising and ruler Pluto talk of taking control of a situation. Mars and Pluto however are square one another so we aren’t going to get back to enjoying life quickly, no matter how hard we push. It’s going to take time which may be frustrating. No pushing and shoving please, form an orderly queue – that’s the phrase that comes to mind with this aspect!

I note the Moon riding high on the MC and the opposition to Neptune. This rather eloquently speaks of the retired (Neptune) elderly lady who has gone from invisible (Neptune) to visible (MC!). Pluto is trine to the Moon and the MC, which speaks of fortification, protection, power. The Moon, MC and Vesta (focus) are all in the health orientated sign of Virgo.

Note that the Moon is also square the Nodes and in the degree of the Nodes. This is the Moon wobble, the crisis point in eclipse season, karmic, powerful, intensely creative. Neptune’s opposition to the Moon, aside from describing the lady in question as first recipient, can also represent all the unknown factors, such as how long will the vaccine last, will it do as we hope it will do? The Sun is waxing towards a square with Neptune tomorrow so I think that we should anticipate some uncertainty to come. Still, the Sun is fortified by Mars and Hygeia and I don’t want to take away from that. I think it suggests that it’s important that we don’t get carried away that this is the answer to all our prayers. The chart certainly strongly suggests the vaccine will help, but nothing is perfect. Saturn’s anaretic position reminds us that it is vitally important that we are realistic.

With Saturn on the anaretic degree of Capricorn we have the feeling of urgency, the weight of responsibility the huge mountain to climb, the questions about ‘longevity’ of the vaccine. The ‘mountain’ was actually mentioned in the article linked above this morning but it has since been re-written! Note that today has been dubbed ‘V-Day’ – yet another reference to the war symbolism which has been strong throughout this year. I spoke of this in depth initially in my forecast for January 2020 where I did a long piece on the Saturn-Pluto conjunction. Rather than a world war fighting each other, the war has been on Coronavirus. V-day traditionally stands for ‘Victory Day’. Oh and one other point, the second person to receive the vaccine is called William Shakespeare! Symbolically, this tells us then that the story of Covid will stand the test of time and be told far into our future. The line ‘All’s Well the End’s Well’ is appearing now in the headlines – sweet <3

Just to throw in some other asteroids for thought – Sedna is sitting on the Descendant in the 6th house of this chart, describing the sacrifices we have had to make for the sake of our collective health and we will still need to continue to do so for a while to come. Uranus also in the house can represent the instability we have experienced as a result of the health crisis.  Yet Uranus here also points to an important awakening, not to mention scientific advancements that have come in the wake of Covid.

Medical asteroids Asclepius and Chariklo are conjunct Jupiter. Asclepius is connected to healing, medicine and physicians. Chariklo was the wife of Chiron – she who holds space, the healer of the healer – perfect considering that many of the front life staff in the health services will receive the vaccine first.

Osiris, he who was torn apart, is conjunct Saturn – it makes me think of the ‘Build Back Better’ refrain that we keep hearing in different quarters. Iris, Goddess of the rainbow is also here. There is hope, we can rebuild him – wasn’t that something from the Six Million Dollar Man? Yes, rebuilding is going to be costly, very costly.

Themis is conjunct the Sun, which speaks of divine order, justice, putting things in place, fairness and natural law. Minerva is conjunct the Moon emphasising the wisdom of the divine feminine. She is the Roman version of Pallas Athena who has just stepped into Aquarius. Pallas is also associated with wise counsel, wisdom and strategy and her genius is brilliant in inventive Aquarius. Pallas also brings peace through her invention of the olive tree. Perhaps too this new invention will also restore peace back to our world. It will take time and the road is long and hard but still, I consider this to be a very supportive chart of today’s momentous event.