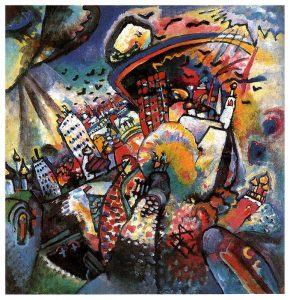 2021 begins with Mercury returning in bounds on January 4. After a period of time where communication and ideas have been a little on the wild side, it’s easier now to rein in our thoughts and clear our minds.

We have a Last Quarter Moon on January 6 bringing tension between the Moon in Libra and the Sun in Capricorn. Maybe it’s taking us a while to shake off the holiday vibes and we’d still rather spend time with those we love rather than getting back to work. Mars also enters Taurus on this date and, whilst Mars is moving out of his home sign, after six months in Aries, I think we are all ready for a change of pace.

Mars is Taurus slows us down and makes our actions more deliberate. Our goals are focused around practicalities, the business of survival, money, food, shelter, getting food on the table. As Mars rules muscles and Taurus is first of the earth signs, this is also a terrific transit for exercising the body and strength training. Whereas in the previous sign, Aries, we are focused on initiating new projects, Taurus energy is about continuation of what has already begun. Mars in Taurus will get you to the finish line with any project or endeavour. But we could also find ourselves challenged by procrastination. Once Mars in Taurus gets going, it doesn’t tend to stop but getting started can be tough. Taurus likes to languish, eat good food and spend five more minutes contemplating the garden. We might need to give ourselves a push to get stuck in or use techniques like Pomodoro.

Mercury enters Aquarius on January 8 which is akin to opening a window in the mind. New ideas breeze in and we start to think differently about our situation. The mind also seems to work faster now after Mercury’s more considered transit through Capricorn. This is an excellent time for brainstorming, group discussions, meetings with friends, working with or tuning up computers and sharing thoughts and ideas.

Venus enters Capricorn also on January 8 changing the way we approach our values, self-esteem, relationships and money. In Capricorn, Venus has an appreciation of limits and definition. This is a sign of clear boundaries and commitment. Whilst our sense of ‘fun’ might be muted here, relationships and our bank balance benefit from a mature attitude and conservative approach. We’re more interested in long-term happiness during this time so it may be easier to delay gratification to ensure our desires are met in the future.

Jupiter forms a sextile to Chiron on January 11. This is a one hit wonder which promises developments in healing. I imagine many of us are hoping for further good news regarding the vaccines so perhaps this could be what we are hoping for. But Covid aside, this aspect boosts healing energy and helps us to see the wisdom we have gained from our suffering. It’s also the perfect time to take part in any endeavours that involve protecting the environment as well as educational activities.

From here, tension begins to significantly build. The New Moon in Capricorn takes place on January 13 and it is tightly conjunct obsessive, intense, shadowy Pluto. At the same time, Mars will form a square to Saturn, the ruler of this lunation. This is the last of three squares between Mars and Saturn generated by the Mars retrograde last year. Both planets have since changed signs so the stress between them feels old and new at the same time! Overall, this lunation feels like a test of strength. If we pass, great. If we fail, well that’s great too – why? Because the universe will let us know where there is a weakness we can work on or what needs to be released to make us stronger.

Uranus stations direct on January 14. Now that we have reclaimed the parts of ourselves that we thought were too wild, weird or odd, we can move ahead with revolutionary changes. But we need to watch where we are going as Mars is closing to a conjunction with Uranus too. The atmosphere is becoming heated and wobbly.  There’s also a strong Aquarius vibe building up as the Moon has joined Jupiter, Saturn, Mercury and Pallas in the sign of the Water Bearer. Air breezes in, fanning the flames.  Something stirs. Something awakens.

Mercury enters the shadow zone of its upcoming retrograde on January 15. What occurs around this time will be revisited at a later date. ‘Hold that thought’ is the phrase that comes to mind but that’s going to be hard because Jupiter then squares Uranus on January 17, a movement that has the potential to increase instability. This is a massive drive for freedom, a huge rebellion, a giant protest, a ginormous shake-up, a big surprise. Jupiter and Uranus are also very future-forward planets but the square between them seems to suggest ‘too far, too fast’ – especially with Mars in the mix. Anxiety could also be high. Ground yourself if you feel wired.

The Sun then enters Aquarius on January 19. Aquarius season is normally the time when we seek to break free from old restrictions and try something new and different. I don’t think we will need much encouragement to do this though as Mars then joins Uranus on January 20, kicking off the whole pattern. 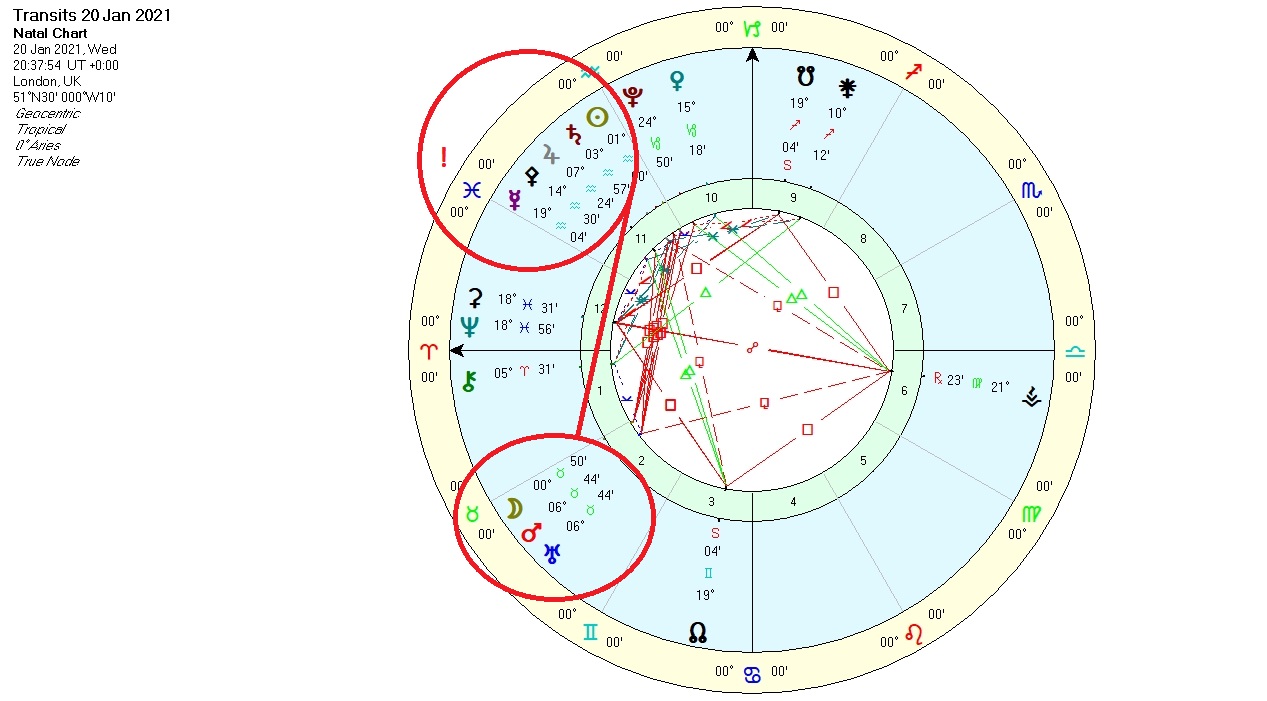 Let’s just lay this out (chart above for reference because you need to see it to believe it!). Uranus has just stationed direct whilst conjunct Mars and square Jupiter (and in orb of square to Saturn) whilst there are 5 bodies in Uranus-ruled Aquarius! I also associate the 11th house with politics. Oh, and we also have the First Quarter Moon in Taurus on January 20 too with the Moon conjunct Mars and Uranus! Wow, this is a feisty and potentially volatile picture for the New President’s inauguration ceremony. Uranus is associated with unpredictable events and this is about as unpredictable as we can get. Still, we could also say that this is like a jump start, a taste of things to come, a surprise. The most important take home message is that we mustn’t overreact. The First Quarter Moon suggests that emotionally we could feel insecure because so much is changing in a short period of time. With Mars involved, we need to roll with the punches, stay flexible. The more we try to keep everything the same, the more the Earth shakes us loose. Don’t forget that all these movements are helping us to move away from what is old and no longer works for us so that we can build a better society and create a better future.

The Full Moon in Leo on January 28 taps into all these mighty movements as the Sun will be conjunct Jupiter as well as in orb of a conjunction to Saturn. The lights, Jupiter and Saturn all square Mars and Uranus. If this were a movie, this would be the denouement, the final revelation as all strands of the story are drawn together.

Finally, on January 30, Mercury stations retrograde which may give us some much-needed breathing space to absorb any events, information or experiences we have come by during this month. For the next three weeks, we will review our connection to one another, our friends and networks, how we use technology and social media and consider what this ‘new era’ may mean for each of us. Whatever conclusions we come too, one thing is sure, the beginning of 2021 is going to be one heck of a ride. Buckle up.

Painting – Moscow I by Wassily Kandinsky