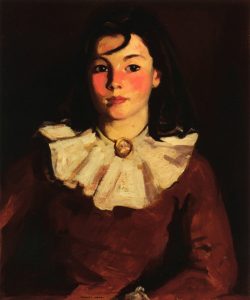 Excerpt from Patreon – Mars however also meets the South Node today [December 15] which tells us that old conflicts and battles need to be put to rest for us to take advantage of the moment. Sometimes energy is lower with this aspect but if so, it’s likely because there has been an ongoing energy drain. We need to look at our deepest motivations and figure out whether part of us has been fighting for a goal or cause that we’ve long outgrown. With Ceres still conjunct the North Node, it tells us that we need to nurture our curiosity. Asking questions will allow us to flourish instead of remaining stuck in old paradigms.

19-Dec-21 Mercury square Chiron. Chiron stations direct. Full Moon in Gemini. Venus stations retrograde. Communication is a peak issue. Painful conversations to stimulate healing. A need to re-evaluate what is important in relationships of all kinds and reconnect with values.

Painting – Portrait of Cara in a Red Dress by Robert Henri