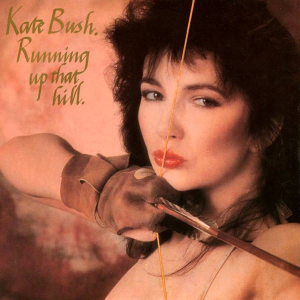 When I say I am a massive fan of Kate Bush, I mean I am a MASSIVE fan of Kate Bush. Some people remember exactly where they were when Kennedy was shot or Elvis died. I remember exactly the moment I first heard Kate. I was nine years old, sat on the backseat of my Dad’s old car. I was squinting my eyes at the clouds in the distance because it would make them look like mountains and make me feel like I was going somewhere majestic and interesting. And then all of a sudden, Wuthering Heights came on the radio. Bam – shot by Cupid, right there!

My heart did a little skip. I stopped squinting, dropped my gaze, let the music wash into me. It did something…indescribable. As an adult now with a command of words, I can look back and say, in that moment, Kate spoke to a part of me that had been ignored so far. Indeed, she woke the witch, taught me who I was, brought music and magic into my life. The next time I visited my grandmother, I grabbed her copy of Wuthering Heights and read it, soaked in the wild moors, endless yearning, the pain of love. I still have the same copy, published in 1939. The pages are thin. My grandmother’s faded signature is on the inside cover. I run my fingers across it. Old ghosts.

I had to wait until I was old enough to buy Kate’s records as my parents did not share my fascination with her. I borrowed tapes from the library and then when I finally had money, I bought every single album and single and 12 inch that she released. Hounds of Love was the first album I bought, and I played it to death, over and over, learning every line, every nuance of expression in her voice. Yes, the LP was on vinyl, a huge gatefold album and it spoke of dogs and witches and wild weather and death and drowning and the sea, oh the sea in all its terror and beauty. It spoke of being a spirit, looking down on Earth, choirs singing. The beat of the drums made my soul dance. I wanted to BE Kate.

So here I am, 45 years later, still able to recite every single lyrical line on Hounds of Love (not to mention all her other albums). I’m utterly delighted that Kate has reached number one with Running Up That Hill after the song was featured in THAT episode of Stranger Things. What an episode that was! Props to the fabulous Sadie Sink for her excellent depiction of Max. I swear I broke out in goosebumps as I heard the first bars of Kate’s song in the show – the song that would save Max and perhaps now is saving us all in some weird way in the Upside Down. 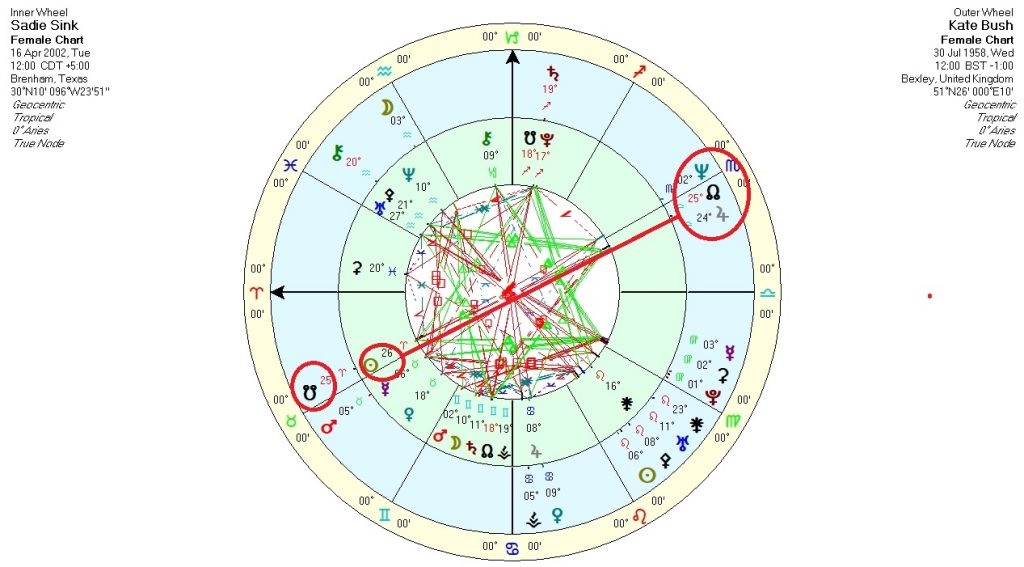 It doesn’t surprise me at all to see that Kate’s South Node is directly conjunct Sadie’s Sun – what a lovely example of a karmic connection. And Kate’s North Node-Neptune-Jupiter conjunction also opposes Sadie’s Sun. Yes, a story of being ‘saved’ by Kate really resonates with the astrology! Oh, and in Sadie’s natal chart, she has a square between her natal Mercury (mind and communication) and Neptune (imagination and music). It’s a wonderful aspect for an actress as she can mould and shape her mind to take on different characters. But it’s also descriptive of being highly influenced by music and imagination and film, echoes of the character she plays.

There isn’t, by the way, a birth time for either Sadie or Kate so I’m working with charts that are set for midday and I’m using the natural houses i.e. Aries Rising. We don’t know their actual rising signs or house placements. I’m just going to work with what we do know. 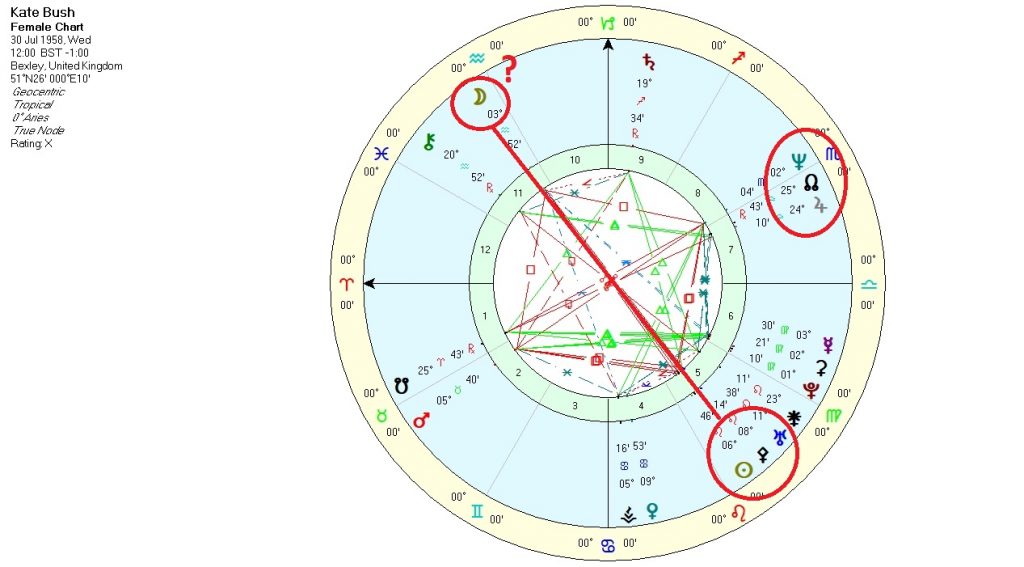 Kate has a triple conjunction between her Sun, Pallas and Uranus in theatrical Leo. It’s perfect for this quirky, unusual, innovative, wise, completely individual artist. Without knowing her time of birth, we can only guess at her Moon sign. Aquarius feels right, as does the witchy idea of being born at full moon but that is conjecture. Still, we do know that she is filled to the brim with progressive, creative ideas and a wizard with lyrics. A Jupiter, Neptune, North Node conjunction suggests the possibility of great success (Jupiter) in this lifetime with her music (Neptune). 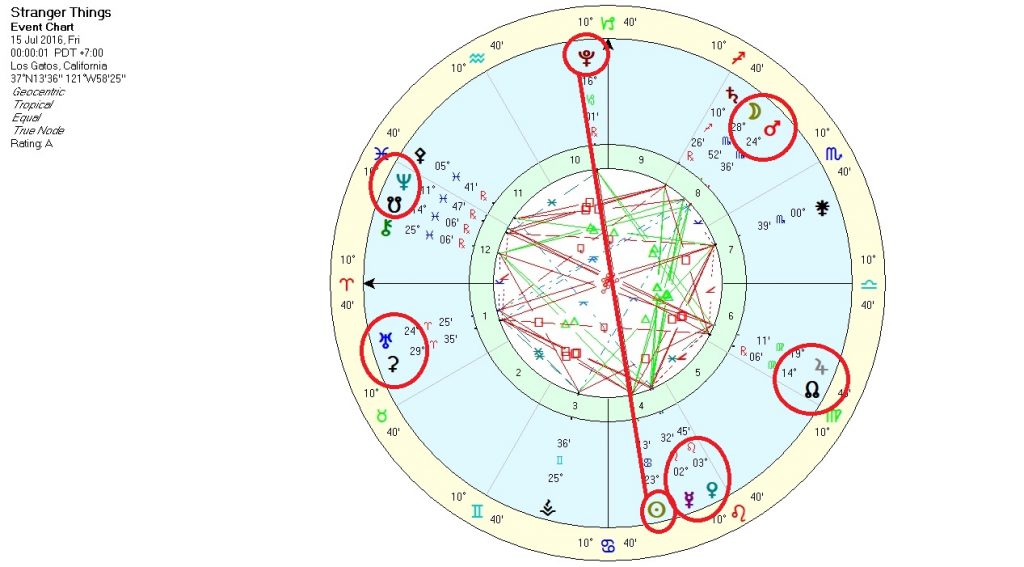 What about the chart of Stranger Things? Yes, everything has a chart, even a TV show. I discovered that Netflix, the platform that distributes the show, tends to drop shows at midnight on the day of release. I’ve used the town where Netflix is based as the place. Using these source details, we end up with a chart which puts the Sun opposite Pluto – perfect for horror! Not to mention a perchance for killing off characters who we’ve come to know well. The Moon too is in the 8th house, the house of death, mystery and taboo! We find chart ruler Mars here as well – young warriors, fighting evil – whether in a D&D match or the mysterious military or the creatures that roam in the other world. And then we have weird Uranus there in the 1st house – it looks ‘strange’ indeed! Alongside is Ceres whose anaretic status could read as a ‘planet in peril’ genre. Uranus also gives us some ‘shock’ factor which has certainly borne out if you watch the first episode of season 4!

I love that the Sun in the Stranger Things chart is in the 4th house in Cancer as there’s plenty of nostalgia here with a show set back in the 80’s. It’s one of the great appeals that has led to its success. We also have the young actors/characters here too, symbolised by Mercury in Leo, who we love -Venus. The North Node conjunct Jupiter – like Kate’s chart, it speaks of the potential for success, heavenly blessings. And look, Neptune is conjunct the South Node too, so we have a similar Neptune, Jupiter, Nodal connection that we saw in Kate’s chart. 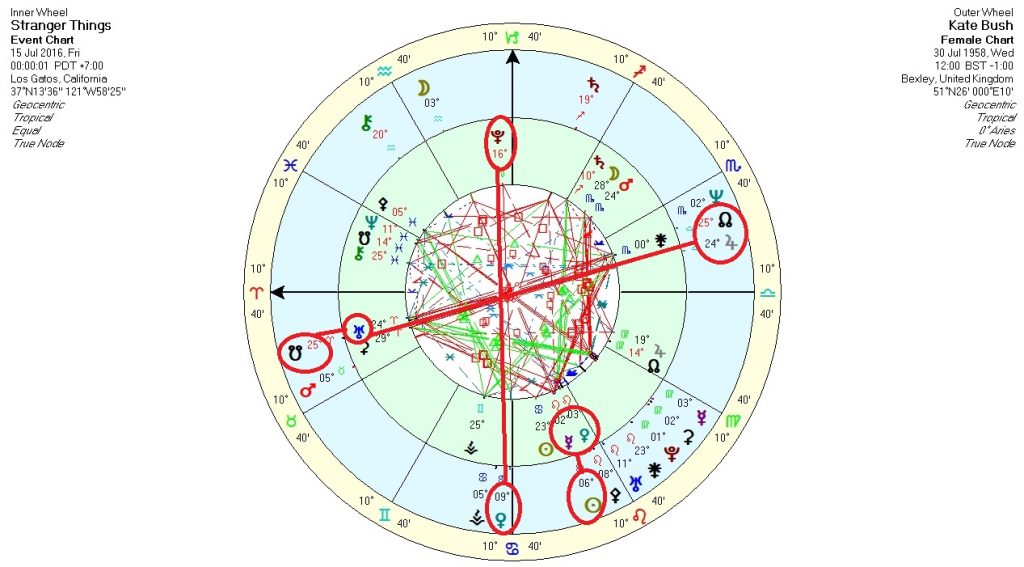 If we put Kate’s chart around the chart for Stranger things, we see that Kate’s South Node is conjunct the natal Uranus of Stranger Things – yes, definitely working, no magnifying (Jupiter opposes!) the kooky element. And Kate’s Sun lights up the Mercury-Venus conjunction which guarantees that everybody loves talking about this connection! A wide opposition from Kate’s natal Venus to Stranger Thing’s Pluto could certainly describe our obsession with her again – not to mention making bank for Kate. 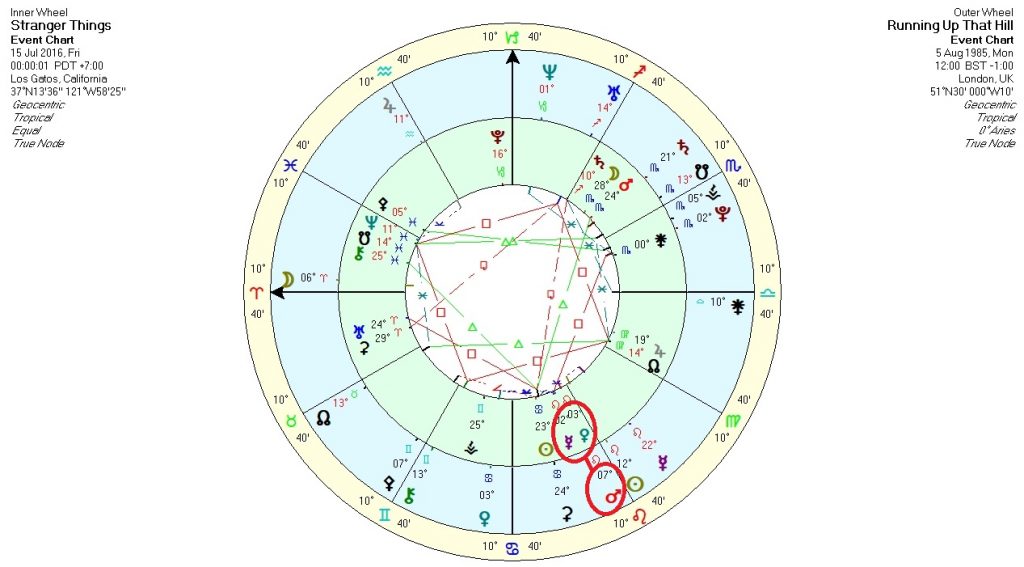 Running Up That Hill was released on August 5, 1985. Again, we don’t have a time of birth as such so I have set the chart to 0 Aries Rising. Still, if we put this chart around the chart of Stranger Things, I love that we see Mars conjunct Venus. It seems perfectly descriptive of this song being a defence against the monsters for a young woman! The song’s Sun lights up the 5th house of the Stranger Things chart, bringing immense enjoyment to the show and really putting the youngsters in the spotlight. I’m playing of course with the astrology but it’s fun to see how the connections work. 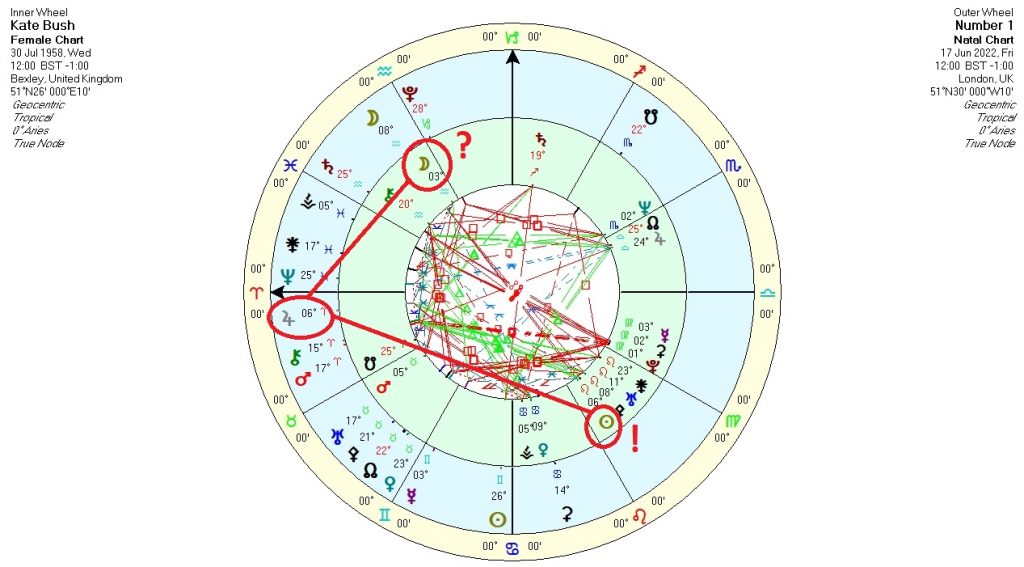 Turning back to Kate’s chart, I note that Jupiter in Aries has ignited her natal Sun with a trine and there’s a possible sextile to her Moon. It’s only possible because without a time of birth, we’re not sure of her Moon’s location. Still, I’m willing to bet on that Moon-Sun natal opposition as I mentioned before. Jupiter can certainly be the bringing of good things and abundance. It’s said that she has made at least another million in the last few weeks as people rushed to purchase the song, not to mention the rights to air the song on the show in the first place. Typically, Kate does not licence her songs for use in film and television but because she was already a fan of Stranger Things, and she liked the way her song was to be used in the show, she gave her permission. Don’t forget too, that she already has Jupiter very well placed in her natal chart with its conjunction to her North Node. Jupiter bringing blessings indeed. 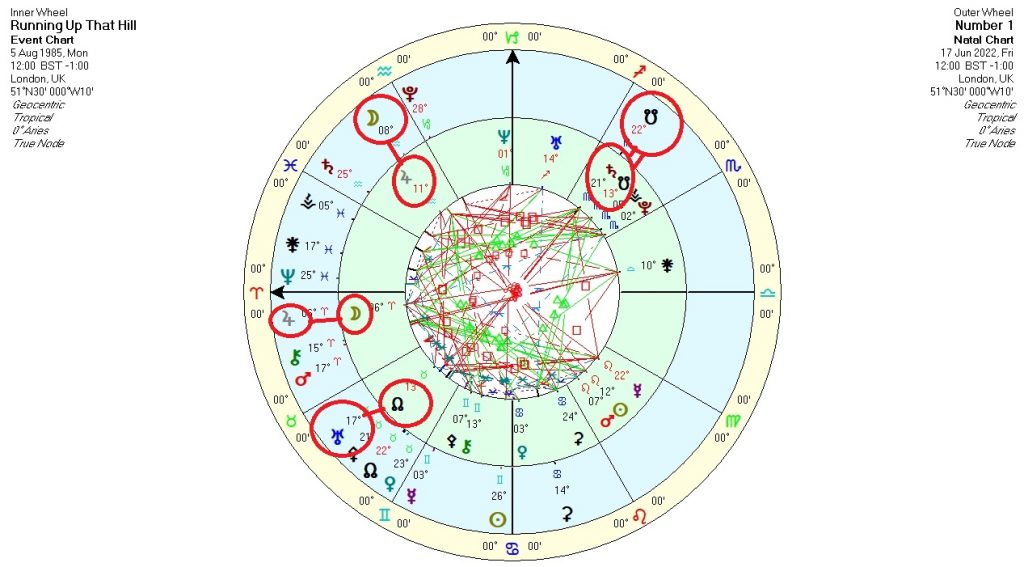 If we look back to the chart for the song, IF the Moon of the song is in Aries, then Jupiter is making a conjunction right now – a perfect aspect that describes huge (Jupiter) public interest (the Moon) and a new and growing audience. On the date that Running Up That Hill became number one, not only was Jupiter conjunct that possible Moon but the Moon by transit was conjunct natal Jupiter – perfect! Uranus, the planet of ‘stranger things’ is still in orb of activating the North Node of the chart

More prominent is that the song is undergoing a Nodal return this year. Any Nodal Return year tends to be important. The South Node is just about to conjunct the song’s natal Saturn (Lord of Karma) – perfect for ‘longevity’ – and maybe a little nod to us older generation as we pass on the gifts of our past to the youth of today.

May Kate’s success, not to mention the success of Stranger Things, continue to soar amongst the stars.

Want more famous people’s charts? I have the following articles over on my Patreon. Perfect for those who are studying astrology and who would like to see it in action.

Kate Bush Image from Wikipedia under ‘fair use’ licence