Both the lights are square to Mars in Gemini, who, although not quite yet in the shadow zone of the upcoming retrograde, is still making his presence known here. This is the third lunation in a row that has had a square to Mars and it has certainly seemed as though the atmosphere has been fractious and angry. Mars in Gemini is pushing us to raise our voices, be heard, speak up and this is important when we need to fight for our rights – or the rights of others. Pisces is a sign associated with the lost and forgotten so yes, using this energy to help other people could be a very useful way of working with it. But, if we feel helpless and hopeless, defeated, and disillusioned, then this Martian energy could be problematic and divisive. We also need to remember that Mercury, ruler of Gemini has just stationed retrograde on the same days as this lunation. A stationary planet brings with it a sense of being left hanging. There is a time to act and there is a time to be silent – knowing which is appropriate is going to be a key issue during this lunation. The way to know is through our intuition but we have to get out of our own way first to get a clear answer. Plus, Mercury’s retrograde also alerts us that we may well have to go backwards before we go forwards. 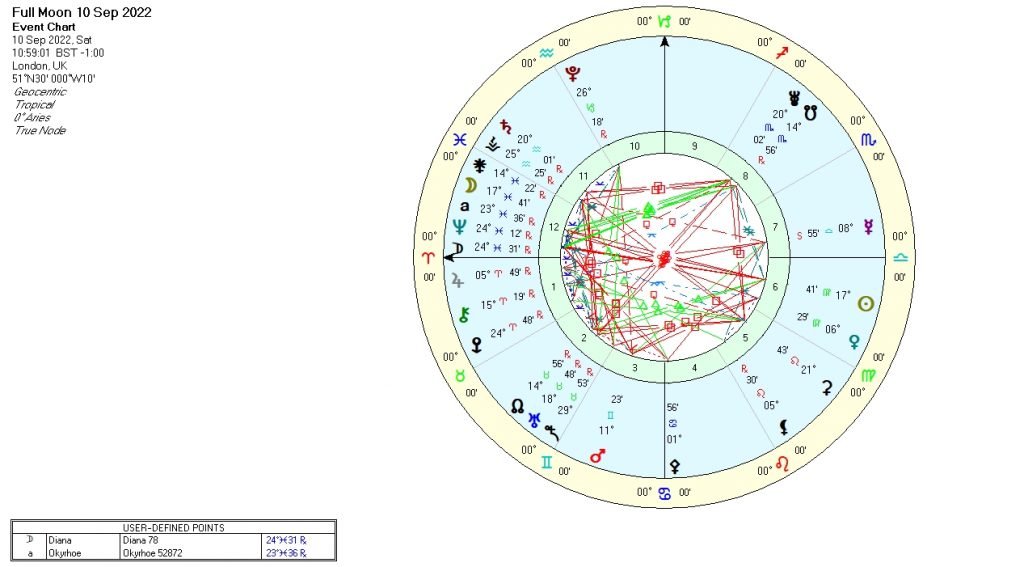 The Sabian symbol of this lunation is ‘In A Gigantic Tent, Villagers Witness A Spectacular Performance.’ It reminds me of going to a circus years ago. This was a human circus – no animals were harmed in the making of this show! And it was truly spectacular!” The circus pitched up for a week in our local park, juggling and tumbling and breathing fire. My ancestors on one side of the family were circus folk. It’s in my blood and yes, more than once I thought of running away with the circus when I was a teenager!

This is a joyful symbol! Here we have an image of togetherness. Everyone is enjoying the show. It echoes what I said earlier [full article on Patreon], about living under the same sky. In some versions of this Sabian though, it mentions that this is a revivalist tent – a religious gathering of some kind. If we strip away some of the associations with particular paths or faiths and simply think of the core meaning, to be revived is to come back to life. So here we are – born again into the truth of oneself. Born again in the knowledge that we are spirit in human form. Born again knowing that we are connected, not alone, not isolated. Born again knowing that this is just one lifetime amongst many. Born again, knowing that meaning is what we make it.

For some, this symbol may represent the idea that we need to get together with others to find a connecting point of reference but at the same time, make room for subtle differences. Watching the show, people are all seeing the same thing but from slightly different perspectives.

It’s time to pull together, to talk about how we see things, to spread a little joy where we can. Spend time with those you love. Reach out to your fellow humans.