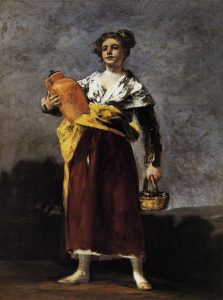 The winds of change come breezing in this week. Mercury’s station direct releases us from three weeks of serious consideration of our past and plans. Some restructuring has been in order to create greater stability for future growth. Now there is more resolve, more commitment, less reticence, less being weighed down by responsibilities that are not ours to carry. The yearly solar conjunction to Pluto occurring on the same date as Mercury’s station, seals the deal. Light shines in where there was once only darkness. Now we know our power.

From there, we enter Aquarius season – happy birthday to all you water-bearers! The emphasis is on new experiences, a new understanding of who we are, a future forward focus that emphasizes your uniqueness and originality. A New Moon in Aquarius followed by Venus conjunct Saturn in Aquarius, plus Uranus stationing direct, is just the push we need to set intentions that centre around freedom and innovation. Break the mould. Commit to what makes you happy and feel in harmony with the universe. Prize your friends. Love your community. Be an anchor of peace and love in this rapidly changing world.

I recorded a 24mins astro-tarot reading for the week ahead over on my Patreon. Click here to join and watch.

18-Jan-23 Mercury stations direct. Sun conjunct    Pluto. Uranus sextile Pallas
A pause as you regain your sense of direction. A confrontation with the truth brings enlightenment. Sudden insight into old patterns of behaviour.

20-Jan-23 Sun enters Aquarius
A conscious desire for space and freedom. Expressing your uniqueness. Focus on friends and community.

21-Jan-23 New Moon in Aquarius
Sowing seeds for the future. What new situation do you want to start? A powerful new beginning.

22-Jan-23 Jupiter conjunct Juno. Mercury trine North Node. Venus conjunct Saturn. Uranus stations direct
Marriage and/or commitment that comes from the heart. Being brave enough to ask for what you need and say what you want. Owning your ideas. Awakening to what is truly important.