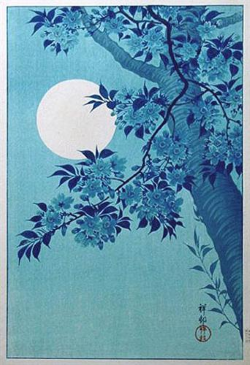 The cycle of the Moon gives us a rhythm to live by. In the yearly round, each month there is a New Moon and Full Moon – a beginning and a culmination. Because the Moon’s orbit takes on average 28 days, every two to three years we have a second Full Moon in a month, commonly called a Blue Moon. The lunar month begins at New Moon when the Moon and Sun are in conjunction. Roughly two weeks later, the Full Moon occurs when the Moon and Sun lie opposite one another.

By following the Moon’s cycle through your chart, each month you can see what needs attention and where you are bringing things to fruition. Each lunar month brings two opposite houses of your chart into focus. 1/7, 2 /8, 3/9, 4 /10, 5 /11, 6 /12. Occasionally, depending on your house cusp degrees (and house system used), this cycle can become altered so that for a time, the Full Moon may fall in the next house along. For example a New Moon in the 2nd house with a Full Moon in the 9th house. I tend to think of these periods where you are being stretched to go the extra mile. Perhaps there’s a need to make up for lost time, gain ground or perhaps it’s simply that what is begun in the house of the New Moon needs culmination in the house of the Full Moon. Watch the cycles for yourself in your own chart and see how it manifests.

New Moon
The Moon and Sun are conjunct.
The house of the New Moon indicates where in your life there is the potential for beginnings. It is the perfect time to set intentions, make a start, visualise, pray, ritualise your wishes and generally focus your attention on the concerns of that house. It is a time of renewal and can be accompanied by a feeling of excitement or anticipation. As the Moon waxes, your projects and ideas grow. You make connections. Things develop.

Full Moon
Moon and Sun are opposite.
At Full Moon, the house will show what needs winding up, bringing to a head, completing. finishing, bringing to public attention, projecting or put on display. It can also be a time when problems come to a head or the short fall becomes visible. Full Moons tend to be more emotionally charged than a New Moon due to the tense opposition aspect between the Sun and Moon. What we privately began at New Moon, now comes out into the open. The reactions and responses from others generate certain responses in us. As the Full Moon begins to wane, it’s time to release what isn’t needed for the next part of the cycle.

Eclipses in astrology are by their nature unpredictable. Things can come out of the blue. There can be pleasant surprises or unwelcome revelations. Generally eclipses can throw you a curve ball. Try not to get caught up in the horror stories because one of the blessings (and the beasts) of eclipses is that they rarely manifest in the way you think they will! Also, if the eclipse is unaspected and not triggering any other transit or progression in the chart, it may pass by as a mere blip on the horizon. Just take note of the house in which it falls for future reference. Eclipses usually stimulate pairs of houses so this house axis indicates areas of life that may be brought sharply into focus. If the eclipse (solar or lunar) is aspecting an important point, the degree tends to remain sensitive for some time to come – up to around three years in some cases. Mars particularly tends to stimulate the point by conjunction or opposition. Saturn tends to bring the eclipse effect to a close.

How to Use the Moons
I tend to find that New and Full Moons tend to have the strongest effect when they are aspecting a planet, point or houses cusp in the chart as mentioned above – particularly with the hard aspects (conjunction, square and opposition). They can also activate other transits and progressions in the chart. I use an orb of around 2 degrees for a New or Full Moon and 3 for an eclipse.

It can be useful to look back to previous New and Full Moons to see where they hit your chart. If you keep a journal, check to see what was happening at the time. Consider the house, planet and point that is aspected to get a clearer picture of the effect. Even if you aren’t sure of the aspects involved, following the houses of the Moon phases can give you an excellent way into your chart. By focusing on the nature of each beginning and peak lunar cycle and the area of life affected, you are beginning to tune in to the rhythm of your own chart, growing in awareness of your connection to the cosmos.